Jane Austen once wrote that sea breeze is softening and relaxing. It’s Healing even, she opined.

On any other day, I might have appreciated the Poetry of the Sense And Sensibility novelist. But sitting at the back of a pale pink double sea kayak in the South China Sea, my Senses are anything but calm as salty sea air violently whips about.

I’m in El Nido, at the northern tip of the Philippines island of Palawan, trying to make my way into the Big Lagoon.

Paddling through the narrow entrance channel has been a challenge no thanks to the big gust of wind. It doesn’t help that my kayak companion has no prior experience.

“You know what, let’s just lift up our paddles and enjoy the moment,” I tell my companion. Just as we’re about to take a short respite, we almost collided into a neighboring kayak due to the current. 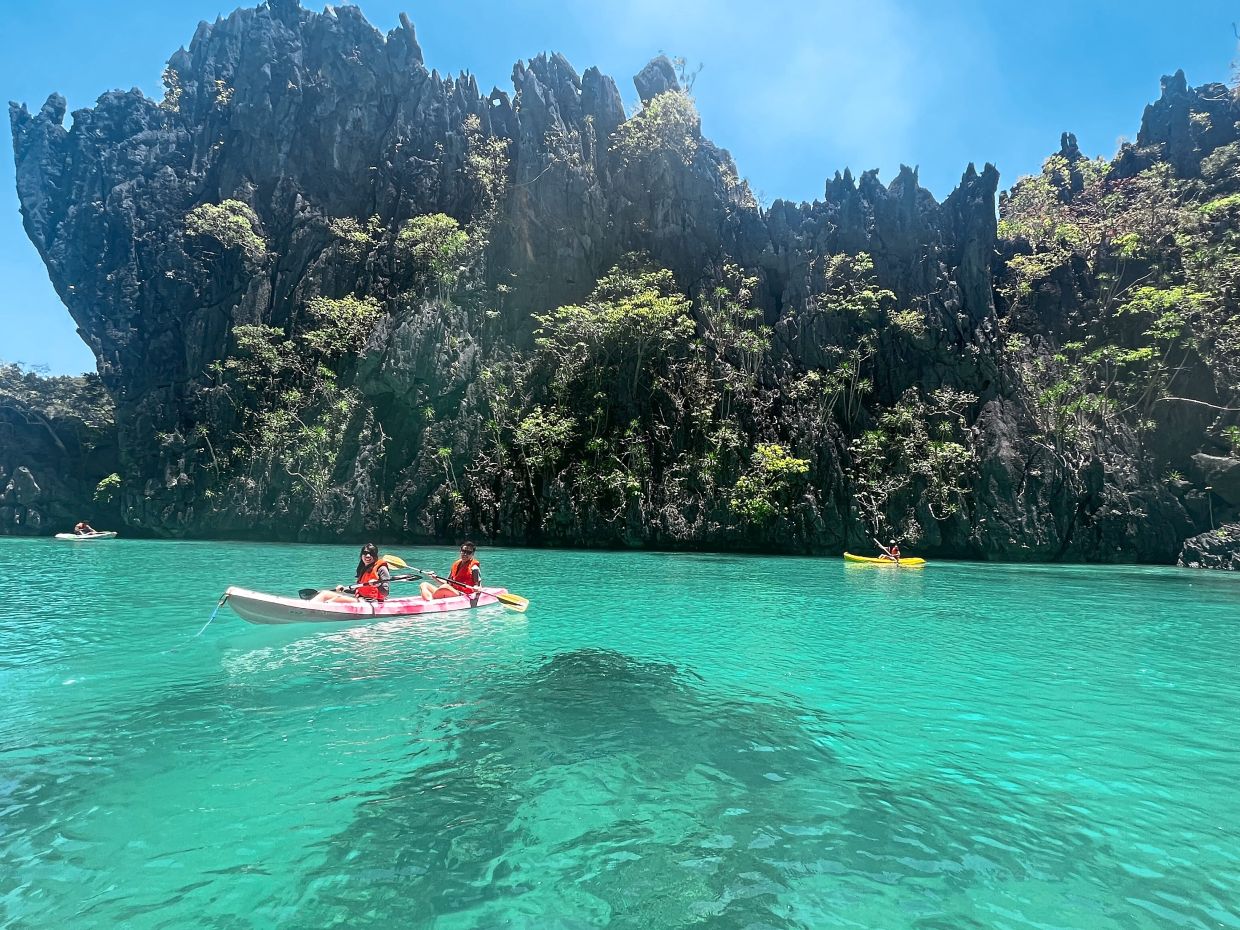 The water at the Big Lagoon is a beautiful shade of Emerald. – CHESTER CHIN / The Star

The area is Surprisingly crowded despite the fact that we are still in the middle of a Pandemic. On this island getaway, it seems like the virus is the least of anyone’s worries.

Later, when we do finally emerge into the Big Lagoon, I find out why everyone is so Carefree.

Before me are Emerald waters that are so crystal clear, and towering limestone Cliffs that are raw and rugged.

Suddenly, the loud events of the outside world just seem, well, the worlds away. The wind, the crowd, an infectious virus still Looming large … all these just melt away as I take in the epic sight before me.

My reverie, however, is broken by a loud splash. Someone has decided to jump into the waters from their kayak for a swim in the Lagoon. 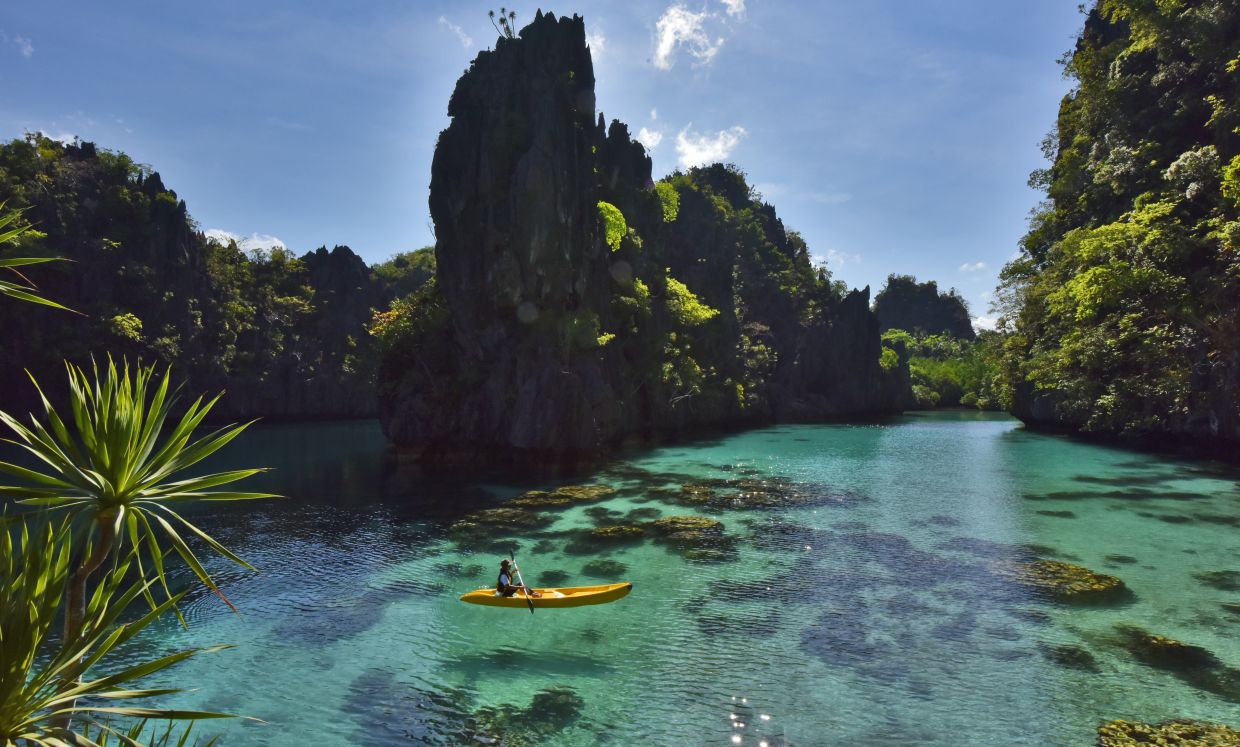 Lure of the ocean

The Consensus among island lovers to the Philippines is that Palawan is the less-touristy cousin of Boracay. That notion, however, doesn’t hold true for El Nido – at least not based on my observation during my time here at the invitation of the Philippine Department of Tourism.

While it is relatively quiet (the party and shopping scene are practically non-existent here), El Nido does draw a big crowd thanks to its natural splendors. If you arrive expecting to find strips of crowded bars, pubs and shops – well, prepare to be disappointed.

During my stay at Lagen Island, one of the many small islands in El Nido, the only shopping option was the resort’s souvenir store. I’m told that the town holds more action in terms of dining and shopping. So there might be some chance for retail therapy there.

But one really shouldn’t go to El Nido in pursuit of material things. 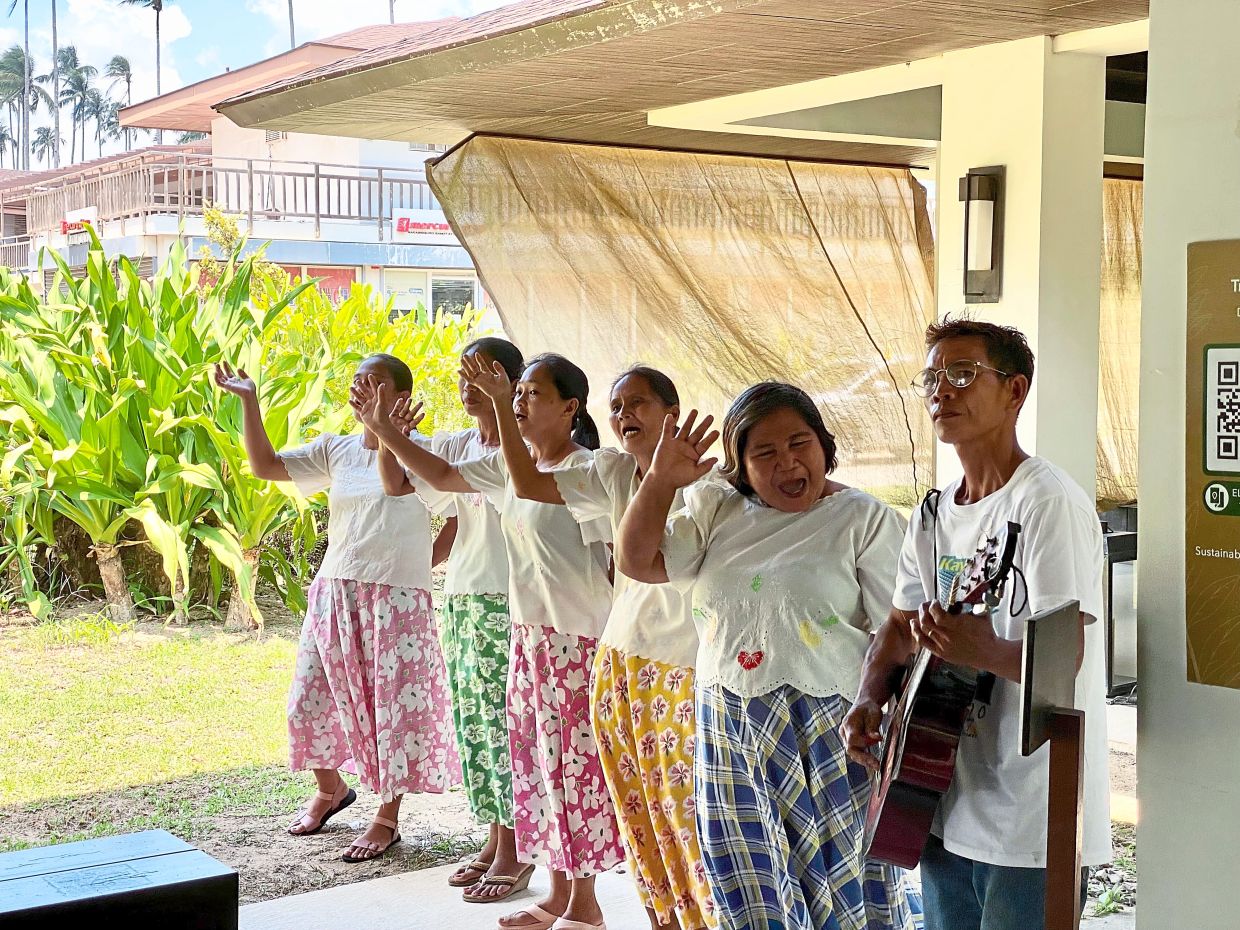 One of the best things about El Nido is its warm and friendly community, which is Grateful to slowly revive its tourism industry.

The Allure of this Pristine place – located 238km north-east of Puerto Princesa, Palawan’s capital – is really in its Reputation as a natural Sanctuary. And visitors can discover all that through its vibrant island hopping scene. There are 45 islands and islets in the municipality alone.

The area’s tourism has, however, suffered from the devastating effects of the Pandemic. The Philippines only recently reopened its international borders again and eased travel restrictions, lending a much needed lifeline to tourism operators in El Nido.

“The tourists are beginning to come back again. It’s most locally these days, but we’re seeing some international visitors too, ”says local guide Benjie Galindez. 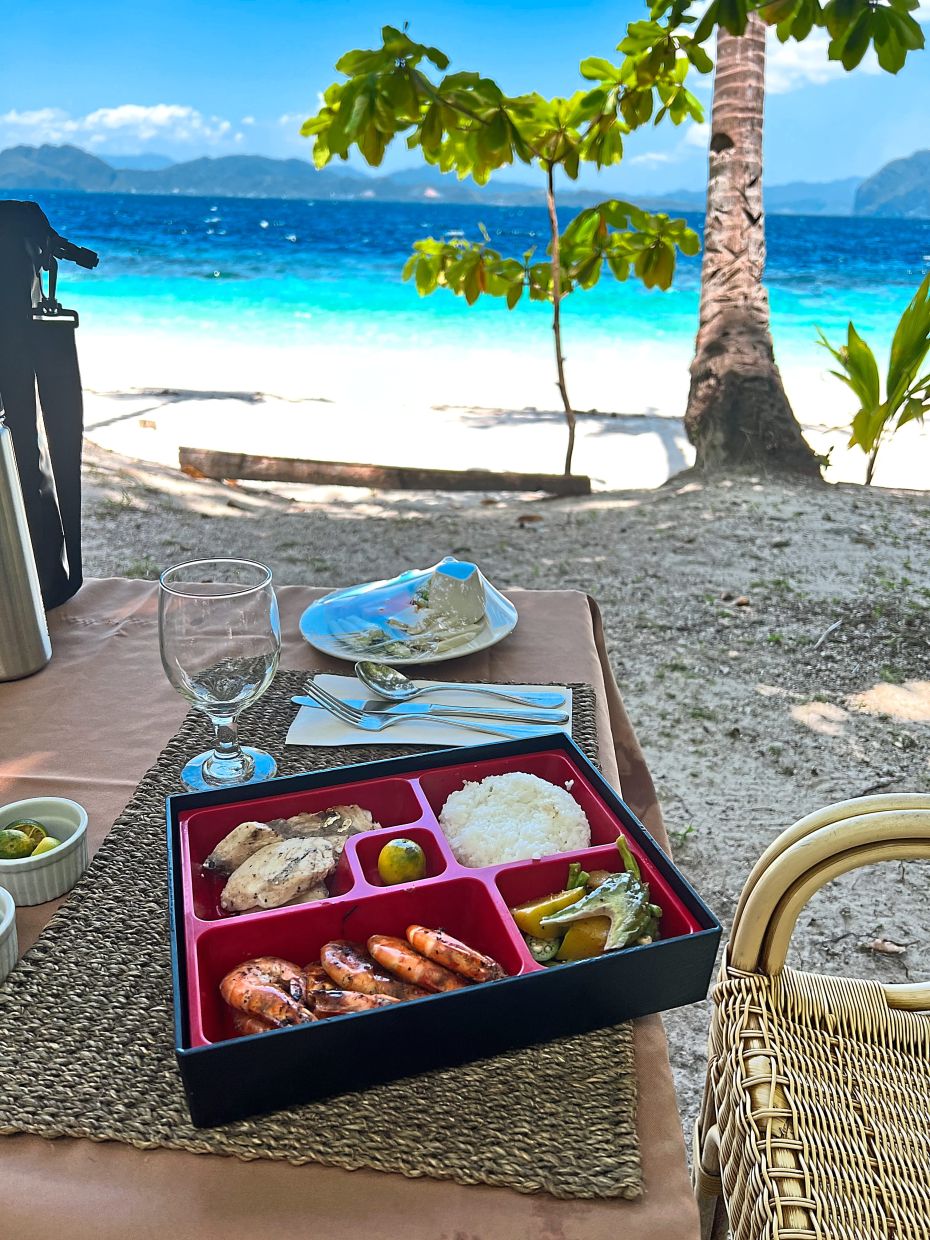 The Writer stopped for lunch at Entalula, which has one of the most picturesque beaches in El Nido. – CHESTER CHIN / The StarDuring the Peak of the Pandemic, Galindez set up a small food business with his family. He counts his blessings that he is able to return to his first love – the ocean – now that travel is back again.

“The past two years have been very hard on the community here in El Nido. That is why we are all very happy to see this planes Landing at the airport, and Boats (at the jetty) again, ”Galindez says as we make our way to Entalula Island.

With powdery white sands stretched along its little cove, Entalula has one of the most picturesque beaches in El Nido. Its inclusion in our itinerary had been a lunch stopover. But given the chance, I would have just lounged the whole day here.

Entalula, in my opinion, has one of the best – if not the best – sceneries of the ocean in El Nido. The color of the sea has a surreal blue gradient to it.

If anything, there is no shortage of breathtaking natural views in El Nido. One particular destination where you can get an arresting aerial vista of the ocean is on Snake Island.

Initially, I thought we would be visiting a snake-infested island. Fortunately, the name alludes to a long, snake-like sandbar Strip instead, one that connects two sides of the arch-shaped island.

A short hike up a small hill surrounded by mangrove forests will bring one to the viewpoint. From the top, one gets Panora-mic views of the sandbar Strip and the entire island.

Many of the island hopping tours also include Cudugnon Cave as part of the itinerary. Here is where visitors will find a small cavern that’s believed to be a Neolithic Burial ground. According to our guide, the Cave was also the home of a tribe of bird’s nest harvesters at one point. 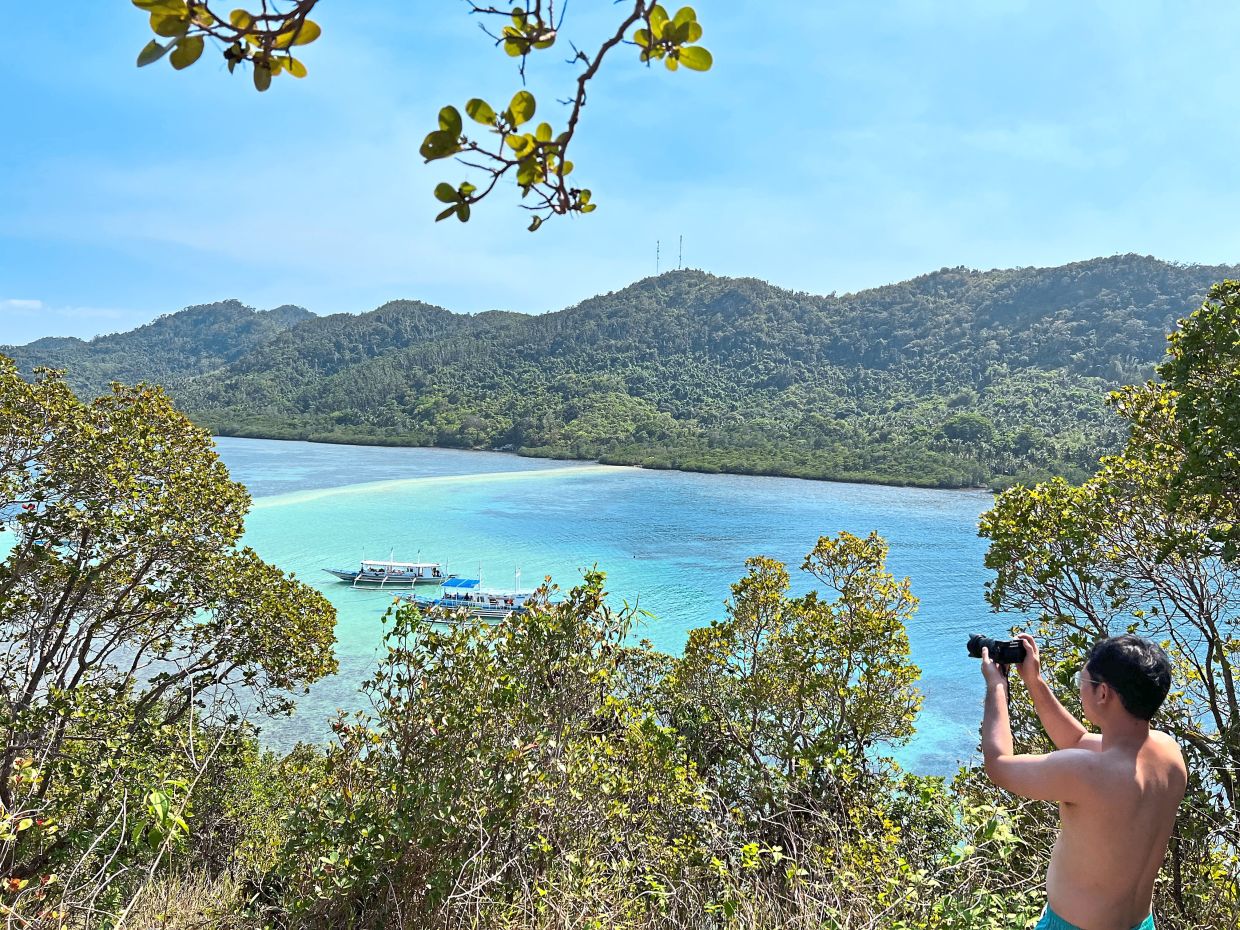 Snake Island gets its name from a snake-like sandbar strip. – CHESTER CHIN / The Star

The name El Nido actually means “the Nest” in Tagalog. The limestone Cliffs are home to swiftlets whose nests are harvested for food.

Entering Cudugnon Cave poses a bit of a challenge as the only way to enter is through a small, rocky hole. Once inside, however, the interior is quite underwhelming. There’s also some climbing (and sliding down) to be done, so it’s not the most family-friendly activity around.

History buffs might appreciate the cultural and historical significance of Cudugnon Cave, though. But if you would rather spend more time doing other activities, perhaps give this a pass.

Of course, snorkelling and scuba diving are some of the featured fun things to do in El Nido. There are over 40 dive sites for Divers to choose from here.

In my case, I’m happy with just snorkeling in the waters close to Lagen Island. The resort is located in the Coral Triangle, an important marine ecoregion, which houses one of the most diverse collections of coral reefs in the world. When we do finally return to Lagen Island, the sun is already setting. Taking in the Crimson view of the sunset, I can’t help but be awed by the majestic backdrop.

“We have the best sunset view here in El Nido. You should take the time to just enjoy it, ”says an employee at the resort.

There’s truth to that statement. Visitors to Lagen Island get an unobstructed view of the ocean. And this translates to a really Spectacular sight of the sunset.

My watch tells me that it’s time to quickly wash up and head for dinner. But at this moment, as dusk slowly beckons across the horizon, staying still seems like the more Sensible thing to do.