PETALING JAYA: Universiti Malaya (UM) continues to be ahead of other Malaysian institutions in the Quacquarelli Symonds (QS) World University Rankings 2023, retaining its place among the global top 100 varsities for a fifth consecutive year.

Ranked at No. 70, UM achieved one of the world’s top 50 Employer Reputation scores (35th) for the second consecutive year while improving two places in its Academic Reputation score. 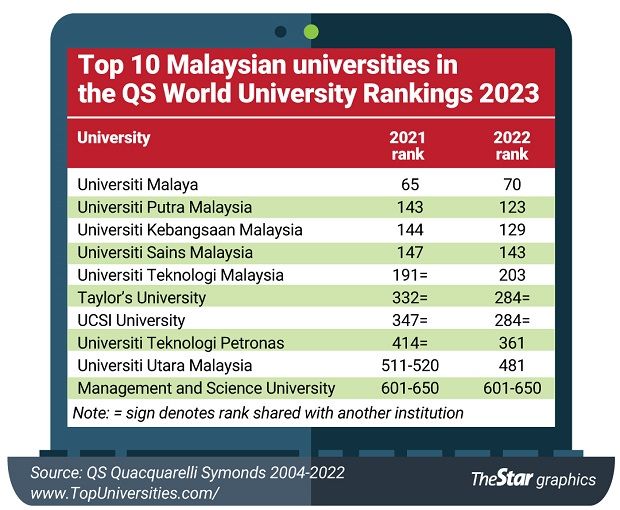 It also improved its score for the indicator measuring the percentage of international students.

“We will also provide opportunities for experts, industry practitioners, alumni and notable stakeholders in the industries and relevant fields to share their knowledge and experiences with UM students,” they said in a statement.

UM’s ranking this year, however, is a drop of five places from the previous rankings resulting from its performance in research.

Prof Mohd Hamdi said UM recognizes the seriousness of the drop, adding that the university would take steps to mitigate further decline.

A record high number of Malaysian higher education institutions (HEIs) were ranked this year –24 institutions – with most Universities improving their positions.

The higher education sector improved overall in the international students indicator, according to QS, as 15 Universities rose in this metric, with Taylor’s University ranked 64th and UCSI University and Universiti Putra Malaysia (UPM) breaking into the world’s top 100.

Taylor’s University climbed 48 places to the 284th position in the overall ranking, and achieved one of the world’s top 100 Employer Reputation scores for the second time, making it Malaysia’s number one private university.

Its Vice Chancellor and President Prof Michael Driscoll got the institution broke into the top 1% of Universities in the world.

“The university has taken a progressive approach towards incorporating embedded entrepreneurialism, life skills and social innovation modules, as well as multidisciplinary projects across the board.

“Additionally, all students will graduate with transcripts detailing both their academic and soft skills Achievements – a pioneering approach that makes the institution the first of its kind in Asia,” they said in a statement.

Happy with its jump by 20 places, Universiti Putra Malaysia (UPM) Vice-Chancellor Prof. Mohd Roslan Sulaiman said it is a recognition by the international communities of UPM’s team effort over the years.

Now standing at the 123rd position in the rankings, Prof Mohd Roslan said UPM practices six steps to continuously improve on itself.

“We nurture forward-thinking leaders at various levels to enhance their practices in leadership and governance, curriculum and instruction, research and innovation, industry and community relation as well as student development.

“Our leaders are highly encouraged to be focused, agile and ready to adjust their styles of leading and managing their organizations to suit local and international needs and demands.

“Students, academicians and non-academic staff, too, actively collaborate with multiple stakeholders, both locally and globally, in our day-to-day operation which enables them to stay current and future ready,” he said.

Describing the progress made by Malaysian HEIs as extraordinary, QS senior vice president Ben Sowter said as recently as 2018, UM was not a top 100 university but has now firmly established itself among the 100 best universities in the world.

“In 2018, UPM and Universiti Kebangsaan Malaysia had never ranked among the world’s top 150 – they have (now) both spent consecutive years in this bracket.

“With positive reputational trends and a highly supportive government, we expect this Malaysian higher education to reach new heights in the coming years,” he added.

For the 11th consecutive year, the Massachusetts Institute of Technology in the United States continued its dominance as the world’s number one, while the University of Cambridge in the United Kingdom rose to second place, and the US-based Stanford University remained in third position.

China’s Peking University and Tsinghua University, 12th and 14th respectively, are among the world’s top 15 varsities.

The QS World University Rankings 2023 is the largest with 1,418 institutions across 100 locations, up from 1,300 institutions last year.

The results account for the distribution and performance of 16.4 million academic papers published between 2016 and 2020, as well as for the expert opinions of over 151,000 academic faculty and over 99,000 employers.

The list of rankings can be found at www.TopUniversities.com.