The first time Blair Limbert tried some durian, his palate got so Confused he had difficulty processing what had just happened. It was as though long-Forgotten tastebuds, lying dormant for years, had suddenly been activated.

The Brisbane, Australia-born fruit enthusiast was visiting a tropical fruit farm in Far North Queensland. There, they got to taste exotic treats such as Rambutan, mangosteen and cempedak for the first time.

For obvious reasons, the durian made the biggest impression on him.

“It was the first time I had ever seen a durian in my life. I found the smell incredibly strong and offensive. It really overpowered everything else. It made me feel uncomfortable and I didn’t like it. Then the farmer gave me a pod to try, ”recalls Limbert, 31.

“I’ll never forget the moment that pod hit my tongue. I didn’t know what was happening. There were so many intricate flavors to it that I couldn’t even describe! ” 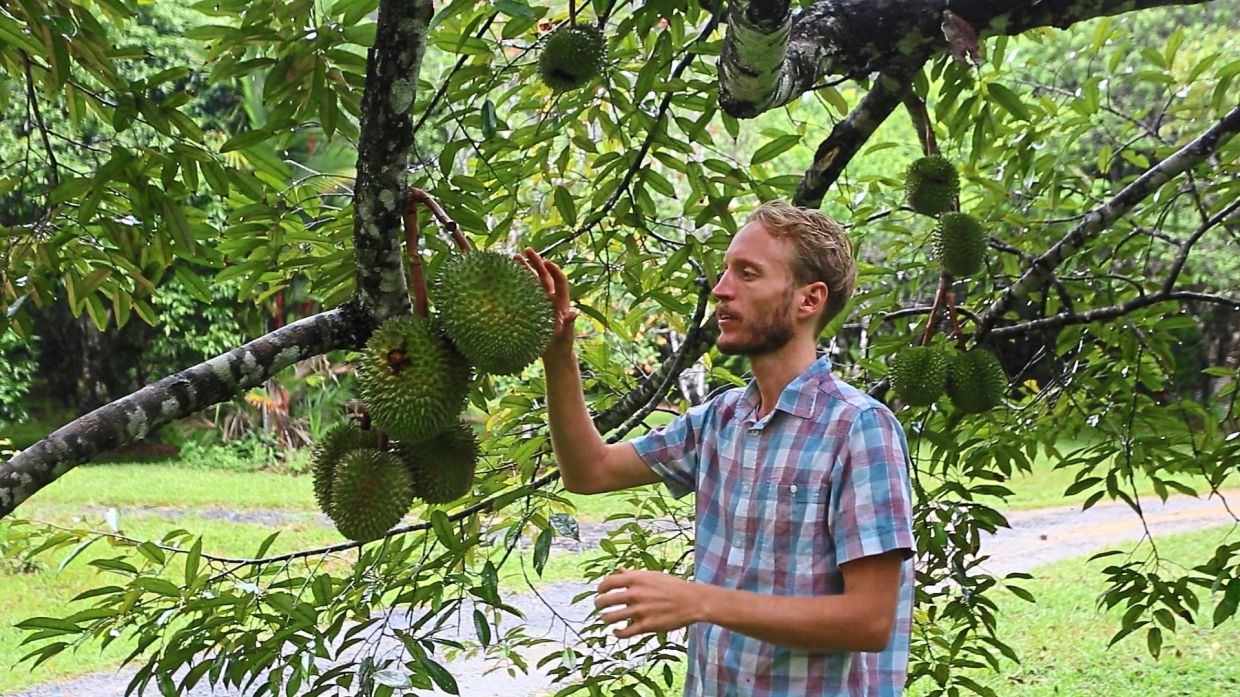 Limbert examining one of the durian trees at The Ripe Time, a farm in Far North Queensland, Australia.

Limbert was completely overwhelmed by this experience. At the end of his tour, the farm owner, Peter Salleras, presented him with two big durians. Tasting them changed his life forever. Limbert fell head over heels in love, firmly crossing into ‘Durianland’ and there was no turning back.

Many people would have just appreciated this durian experience and carried on with their lives.

Not Limbert. He and his business partner Riley Hickson would go on to start The Ripe Time (theripetime.com.au), a farm in Far North Queensland which grows 50 species of tropical fruits including durian, cempedak, jackfruit and mangosteen. The pair has big dreams of promoting durian and other Tropical fruits to Western markets worldwide.

“We intend to become the biggest durian and ultra tropical fruit growers on the planet. We currently have approximately 7,000 Acres (2,833ha) of the best farmland in Far North Queensland under contract. We are currently in the process of getting ready to expand rapidly to the next phase, ”shares Limbert. 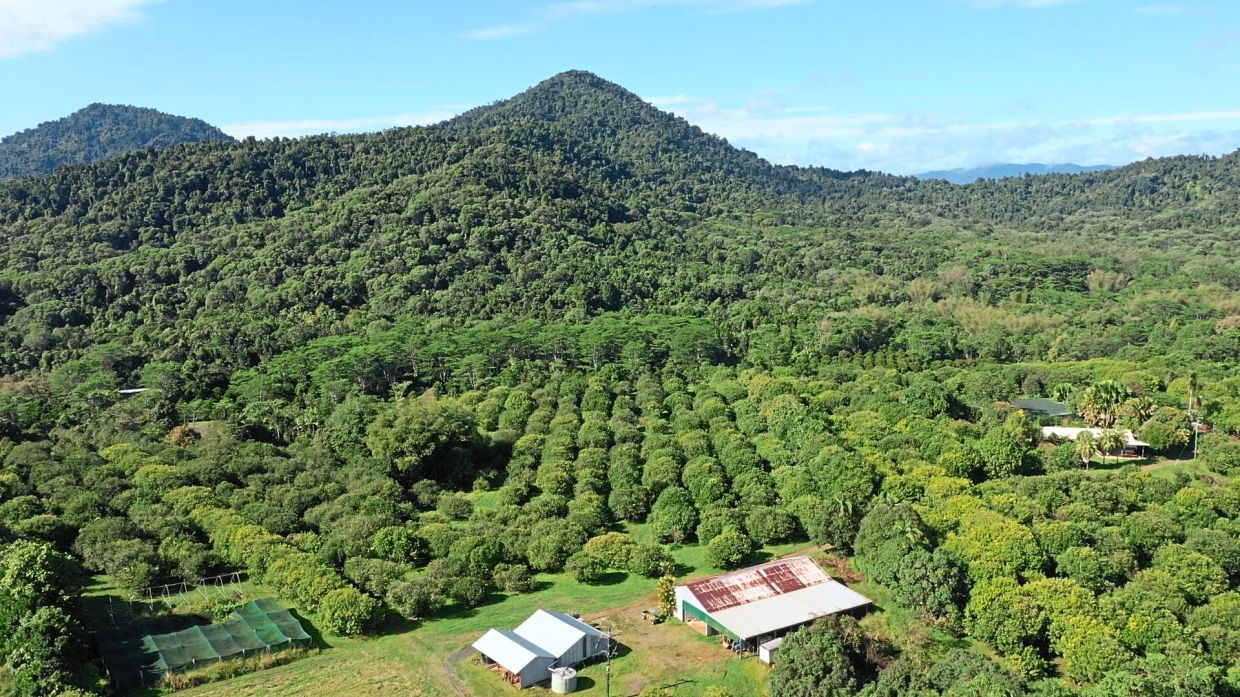 An aerial view of The Ripe Time farm.

Getting to this stage has not been a smooth journey for Limbert.

Growing up, he suffered from various mental health conditions such as anxiety and OCD (obsessive compulsive disorder), and was badly bullied.

As an adult, they suffered from alcoholism and employment problems, as well as poor health due to an unhealthy diet.

Five years ago, Limbert decided to turn his life around. One of the things they did was to go on a high fruit diet.

And while they enjoyed conventional temperate fruits such as apples, pears and oranges, they discovered there was nothing as wonderful as the taste of tropical fruits.

Limbert later teamed up with Hickson (whom he met after the latter bought a cempedak Limbert was selling on the Facebook Marketplace) and they started their venture into the business by planting fruit trees in the front yard of Hickson’s mother’s house.

The duo both knew, however, that now places in Australia were not suitable for growing tropical fruits. There was only one exception: Far North Queensland. This tiny untamed area proved to be the only place in the region with the ideal natural conditions for the growth of tropical fruits.

Starting a farm there seeds like an impossible pipe dream.

By a stroke of luck, Limbert and Hickson managed to find a tropical fruit farm in the area that was well within their budget. The owners had started the 0.5sq km farm in the 1970s, filling it with many of the best fruit varieties from South-East Asia. It even had a huge packing shed, a commercial nursery, and everything they needed.

The duo quickly accumulated the necessary funds and took over the farm last June.

“We moved in and started our new life. The learning curve was the steepest we had ever been on.

“Neither of us had any experience working in a fruit farm. We had to learn now things from scratch. We had no mentors, no farming family, no rich family. Just two young guys with a big dream. Limbert at work at The Ripe Time’s nursery.

“What we had was extreme determination, Discipline and drive. This is our passion, and we would do anything to be the best, ”says Limbert.

“My love for these fruits overrides all challenges. I don’t do this because I have it. I would do what I am doing right now whether I was a Billionaire or homeless. I am living my dream. I am so fulfilled in what I do. I wake up every day so excited to take on the challenges, ”he adds.

Sustainability is a major Guiding principle for the duo, who use only natural techniques at The Ripe Time. Their fruit forests are carefully designed to maximize photosynthesis and enhance healthy plant growth.

“By planting and pruning‘ support species ’surrounding the fruit trees, we ensure we have a consistent supply of mulch to cover the ground and encourage rich soil biology. These ‘support species’ offer shade and protection to developing fruit trees beneath.

“This replicates how all plants begin their lives in the Forests, beneath a canopy,” Limbert explains.

“Another key factor to our success is that we are very selective about the fruit we choose to plant and where we choose to plant them in the landscape. We will often create swales (moist depressions) along (the land’s) contour to improve the soil’s hydrological function and to prevent soil erosion. ” The fruit farmers have also opened a commercial ultra-tropical fruit tree nursery, hosting some of the rarest and now valuable plants in the country.

“The happiest points that we live for are seeing new people try our fruits and love them. And seeing it change their life just like it changed Ours. It is so fulfilling and makes all the hard work worth it.

“Knowing one day we could walk into the supermarkets of the future and see it filled to the brim with durian, cempedak, mangosteen, rambutans and jackfruit excites us so much,” Limbert enthuses.

Recently, the pair launched #OperationDurian, a project aimed at marketing and promoting durians to Western countries.

Limbert estimates that the current global durian industry is valued at between US $ 25bil and US $ 30bil (RM110bil and RM132bil), and conservatively expects it to grow to US $ 100bil (RM439bil) a year in the next decade.

While Limbert loves the fruits from his farm, he is a firm believer that the best durians in the world come from Malaysia.

He and Hickson plan to come to our Shores this year or next to try regional durian varieties such as Musang King, Blackthorn, Red Prawn, D24 and D10.

Limber also hopes to work with the Malaysian durian industry to promote the fruit. In his opinion, the best way of doing so is through effective marketing and providing value-added products.

“People just need to get over that initial shock of smelling and eating durian, like I did. Once they do that, they’ll be hooked. I’ve never seen a person who loves to go back to not liking it, ”says Limbert.

“I believe we need to acclimatize people slowly through products like cakes, pastes and biscuits.

“Then when they eat a full durian, they are used to it and it is not such a shock to them.

“The problem is if someone eats durian and doesn’t like it, they won’t do what I did and try it another few more times. If we can overcome this one hurdle, we’ll win big. And I am very confident of this, ”he says.