“It’s one of the most biodiverse countries in the world and the foundations of the diet are corn, beans, the courgette plant, tomatoes, chilies and wild herbs,” says Miers, 46. Mexico has around 50,000 native plant species (by some estimates ), with some 200 varieties of chilli alone, compared with the UK and Ireland’s 1,500 or so.

Protein often came from moles (a traditional type of sauce made from beans), “enriched with lots of ground seeds”, adds Miers. “The authentic way [to make it] is often very complicated, with 37 ingredients. ” (But don’t worry, she has recipes with just eight).

“A lot of the housewives in Mexico make their own vinegars at home out of guava, pineapple or apple,” she notes.

The idea of ​​packing your diet with a rainbow of vegetables is very much the focus of her new book, Meat-Free Mexican. “I think we’re really beginning to think about food as medicine much more these days, which I think is completely right,” she says. Plus, “people are looking at eating less meat anyway, because environmentally, how much meat we’re eating is a total catastrophe.”

For Miers – who won MasterChef in 2005 and is the brains behind the hugely successful Wahaca chain of Mexican restaurants (where 50% of the menus are now vegetarian) – says: “I love that ancient Mexican food and the modern way we’re all kind of starting to eat, feel very in synergy together. ”

From plant-based versions of Mexican classics, like beetroot ceviche, celeriac and chard enchiladas, chickpea rancheros and cauliflower tacos, to vegetable dishes that celebrate Mexican spices and flavors, like chipotle-tamarind baked sweet potato gratin and baked polenta with veracruzan sauce, her eighth cookbook (and her third Mexican-focussed) is, like all of her recipes, for “people who are busy”. So although some are longer, it all feels do-able for the time-starved generation.

“I’m a working mum,” she says, “I’m perpetually short of time. For me, food has got to fit into busy lives. ” There’s even a place for Tex Mex, with her ‘chile non carne’ – a handy family favorite.

“Some people will spend two days making a recipe and that’s great – and I used to do that, before kids,” Miers adds with a laugh. “But not everyone has that time.

“What I love about Mexican food is you can spend a weekend making your own flour tortillas (I love making flour tortillas from scratch because they taste so good and they’re really easy). Equally, if it’s midweek, I’m just going to buy some and that’s fine. ”

The mum-of-three first fell in love with the food of Mexico while traveling there between school and university. Before that, she’d always thought of Mexican cuisine as American-style Tex-Mex – but eating her way around the valleys of Oaxaca, the coast of Campeche and the rainforests of Veracruz, falling in love with “the color, the vibrancy, the creativity ”soon opened her eyes. She later returned to live in Mexico City and opened her first Wahaca restaurant in London’s Covent Garden in 2007 – now there are 13 across the UK.

“When I look back now, the first thing I think about are the salsas on the tables,” she says, reflecting on the early travels that inspired her career. “They’re made fresh every day, they’re different in every cellar that you go to or every street food [stall], every single cook has their own special recipes. They are all packed full of vitamins and minerals and goodness, they’re fresh and zingy. ”

Surprisingly, it reminded her of home. “My mother always used to make homemade mayonnaise, barbecue sauces, ketchup bases, mint sauce and horseradish cream, so I felt like the Mexican way of eating with salsas dolloped on food was actually quite like the way we eat in Britain – we love to dollop sauces onto food.

“I love layering flavor on things. The salsas, the chilli oils, the moles – for me it’s not just levels of goodness and nutrition but flavor and texture and color. And it brings all the food alive. ”

Guacamole – and avocados generally – may be a staple in Mexico, but their environmental footprint (for a fruit) has weighed heavily on Miers’ mind. It’s why Wahaca put an alternative guacamole on their menus last year – ‘wahacamole’ made from British fava beans.

“Avocados are lovely – but as treats,” she says. “Anything that grows within 50 or 100 miles of you is a great staple to eat because there’s less of an impact. Exotic fruit is great for special occasions, but having them as a mainstay of your diet is going to be bad for the environment.

“I’m a cook,” she says. “I wouldn’t be without my coriander seeds and my star anise and my cinnamon stick. But yes, they come from the other side of the world – it’s about putting it all in proportion. ”

Impact on the environment is the main reason Miers is flexitarian. “I generally eat meat if I’m in control of where it comes from. Factory farmed meat is a big no-no for me, in terms of welfare and emissions.

“Beef, I eat probably four times a year. We buy chicken from the market once every few weeks, because we buy expensive ones that are fed on grass and not grain that’s been grown in the Amazon basin.

“I think that for me is the key – is the animal I’m eating impacting the rainforest in Brazil? Well, if they are, I don’t want a piece of it, personally.

For the future of our planet and for our kids, we have to eat less meat, she urges. “We’re still opening factory farms, and the government’s talking about reducing carbon targets,” she sighs. Runoff from the huge amount of animal waste at factory farms often pollutes nearby rivers, according to Food Print – “so I’d rather not have chicken if it’s from an industrial chicken farm close to a river,” says Miers.

“Why should we eat meat all the time at the expense of species decline and insect extinction and the total destruction of our soil? For the future of mankind, apart from anything else, it doesn’t seem to make sense to me. ”

Who says you need meat or fish for a delicious taco? 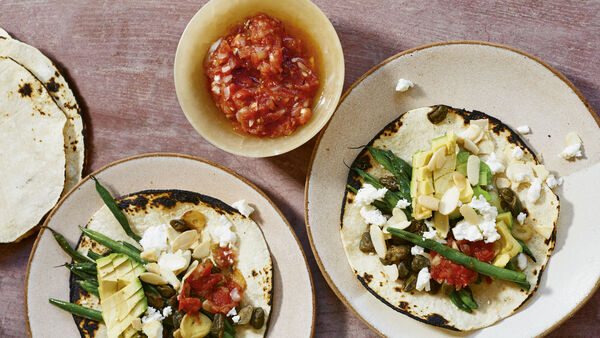