Save-A-Pet, one of Lake County’s largest no-kill animal rescues, is proud to announce that it is celebrating its 50th anniversary this year.

Save-A-Pet was officially founded on Aug. 28, 1972, by Gertrude Maxwell and Hannah Goldman when they presented a proposal for a no-kill shelter at a Highland Park Council meeting.

Since its humble beginnings in a small kennel in Deerfield, to its first shelter building in Palatine in 1976, to its current 10-acre property in Grayslake purchased in 1991, Save-A-Pet has placed more than 65,000 dogs and cats into their forever. homes.

Save-A-Pet’s adoption center has seen numerous improvements in recent years to advance its operations and benefit the lives of its dog and cat residents. In 2016, Save-A-Pet remodeled its main cat room to include updated housing for their free-roaming cats and those adjusting to their new environment.

The shovel used in Save-A-Pet’s 1995 groundbreaking at their current location. Founded in 1972, Save-A-Pet began in a small kennel in Deerfield and purchased the land for its current Grayslake location in 1991.
– Courtesy of Save-A-Pet

In 2017, the Kennel Redesign project was completed, which fully enclosed the outer runs of the canine kennels that were previously protected only by chain-link fencing and seasonal tarps.

Save-A-Pet’s most recent capital project, the Clear Paths Project, which was completed in 2020, improved the outdoor portions of its property by creating more distinctive and durable paths for dogs and volunteers to enjoy their daily ventures outside.

In addition to the physical changes over the last 50 years, Save-A-Pet has held fast to its true no-kill mission and improved its programming to meet the needs of its animal residents, adoptive and foster families, and community.

Save-A-Pet’s animal welfare and operations manager Sally Hubbard is a certified animal welfare administrator (one of only six individuals in Illinois with this certification) and ensures that Save-A-Pet stays committed to high standards and ethical practices in animal care.

Save-A-Pet’s staff also stays current with the most up-to-date research on animal welfare in shelter environments, and now houses their Feline Immunodeficiency Virus-positive felines in their main cat room with other adult cats; a grouping that was previously thought to be incompatible by the animal welfare industry.

Canine care staff also regularly supervises canine play groups, allowing the dogs at the adoption center to socialize not only with humans, but with one another in a safe environment.

Save-A-Pet’s temporary and permanent foster program has grown over the years, allowing the care of more dogs and cats than ever before. The program has been expanded to meet the needs of large intakes from hoarding situations, receive intakes from open access shelters, provide in-home care for animals with terminal conditions and, most recently, to temporarily house its animals throughout the COVID-19 pandemic. 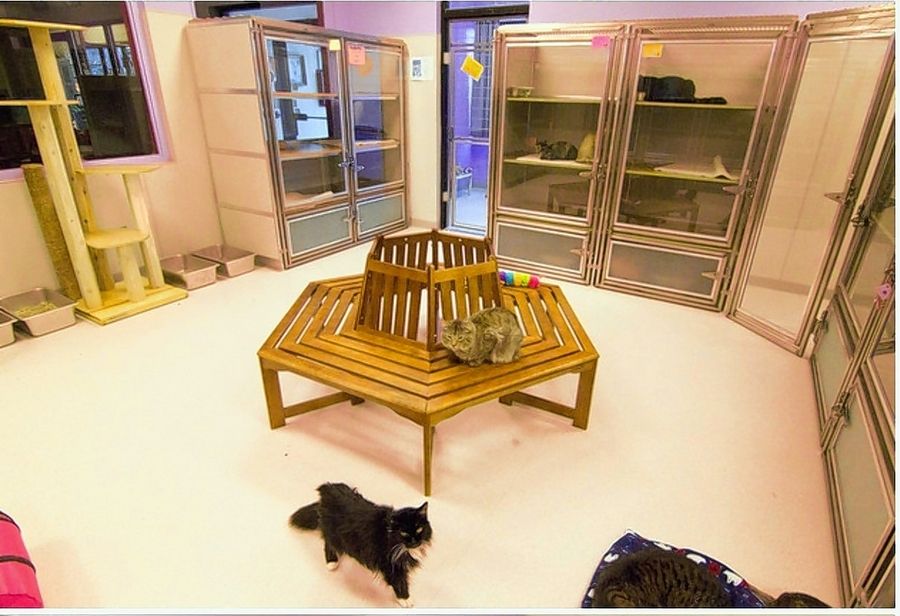 This is in addition to the regular short-term foster program that helps with needs like temporary fosters for puppies, kittens, and animals recovering from medical procedures.

One of Save-A-Pet’s most notable programs is its Humane Investigation Team, whose volunteer members are all licensed by the Illinois Department of Agriculture. This team fields calls from the community regarding concerns for animal welfare, investigates each unique situation, educates the community and local families, and rescues animals in desperate need. 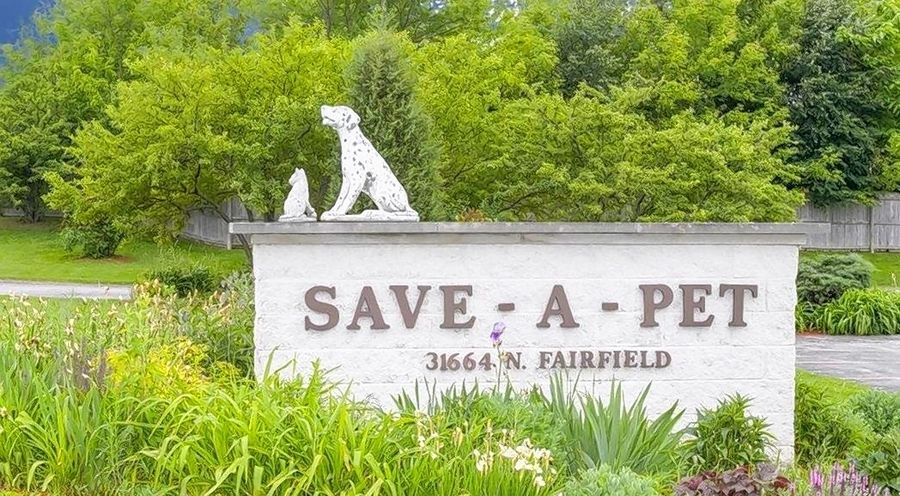 Save-A-Pet animal rescue is celebrating its 50th anniversary this year.
– Courtesy of Save-A-Pet

Save-A-Pet also recently developed a Trap-Neuter-Return program to provide spaying, neutering, and basic medical services for feral cats at a reasonable cost for members of the community committed to caring for them.

Save-A-Pet’s 50 years are full of so many memorable and remarkable stories.

“While some of our animals have backgrounds that will truly break your heart, we will never give up on giving them the lives and love they truly deserve,” Hubbard said. 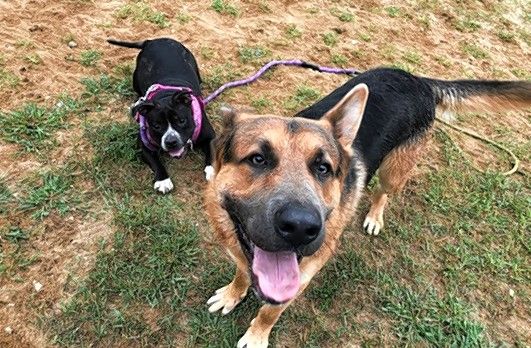 Rambo, right, with Toots, participating in canine playgroups at Save-A-Pet. Rescued as a critically ill puppy, Rambo is now a happy member of a family.
– Courtesy of Save-A-Pet

A beautiful example of its life-changing work is Rambo, a German shepherd who was rescued through a humane investigation as a puppy. It was soon discovered that Rambo was critically ill with the potentially lethal canine parvovirus and needed medical attention immediately.

After fighting for his life, Rambo was later rehabilitated in a foster home and quickly adopted by a loving family. He now visits the adoption center to act as a role model and help socialize dogs in canine playgroups. 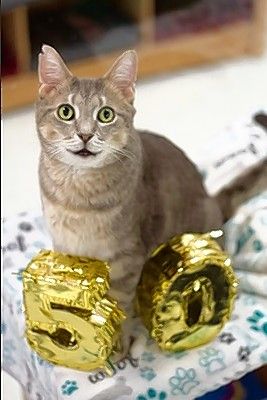 Avocado, a current adoptable resident at Save-A-Pet, is excited to celebrate the animal rescue’s 50-year anniversary.
– Courtesy of Save-A-Pet

Another example of Save-A-Pet’s commitment to their mission is Avocado, a current feline resident. Avocado came to Save-A-Pet through an open-access shelter and was found to have several medical issues needing attention.

He has since been treated for stomatitis, a painful condition that often requires the removal of most, or all, of a cat’s teeth for relief. He was also found to be prediabetic and is currently on a special diet.

“Save-A-Pet always makes a full commitment to each of the animals in our care. Whatever their physical, medical, or behavioral need, we stay true to our lifelong commitment to them, and are so thankful to our donors that make this. possible, “said Executive Director Pat Kennedy-Pfeifer.

No matter how long Avocado needs to find his future family, he will be safe and cared for at Save-A-Pet.

Save-A-Pet is a 501 (c) (3) charity that does not receive government funding and is only able to provide life-enriching care to its animals by the generosity of donors, grants and bequests. It has been rated as a Four-Star Charity by Charity Navigator for seven consecutive years due to its financial accountability and transparency.

Save-A-Pet is proud to rescue animals of varying breeds, needs, ages, and conditions, from healthy kittens and puppies, to senior animals, and those with advanced medical needs.

Its true no-kill mission relies on the committed staff members in its Animal Health, Canine Care, and Feline Care departments, along with volunteers to help socialize the animals, provide transport to veterinary appointments, support fundraising initiatives, and more.

Its Adoptions staff works tirelessly to match adoptable and foster animals with loving families and educate the community on animal care. Save-A-Pet’s community partnerships include collaborations with local animal controls and transport groups to facilitate the rescue and intake of new residents.

Save-A-Pet also works closely with local veterinary offices, in addition to two veterinarians who visit on-site to provide vital care to the animals. Of course, all of this is only possible thanks to the generosity of its supporters.

Also as a part of the 50th anniversary celebration, Save-A-Pet is hoping to raise an additional $ 50,000 this year to put toward the purchase of a new, fully-outfitted animal transport van.

Information about these events and initiatives, as well as information about Save-A-Pet’s adoptable cats and dogs, can be found at www.saveapetil.org. For those interested in following more closely, Save-A-Pet also regularly features its adoptable animals and shares their stories on social media through its pages on Facebook, Instagram and TikTok.

Donations make Save-A-Pet’s no-kill mission a reality, and can be made on its website, by phone, through PayPal, or by mail to PO Box 266, Grayslake, IL 60030.