Skip to content
Animal rescue shelters and organizations across Victoria are being inundated as an unprecedented number of pet dogs are given up by their owners.

The surge in the number of pets being surrendered began just before Christmas and has not slowed down in the past three months.

About 50 dogs a month were being surrendered to RSPCA Victoria before Christmas. That figure is now close to 150.

The charity is now getting about three requests a day, with five coming in on one day last week.

The association has been so overwhelmed it has been forced to stop accepting any more surrenders until at least after Easter – a “heartbreaking decision” to make.

“It’s not something we’ve experienced before, we’ve been in operation since 2014,” said President Hayley Finch.

The RSPCA is also seeing a first with small dogs being surrendered, “which almost never happens”, according to RSPCA Victoria animal care manager Nadia Peiris.

The charity is also seeing a drop in the number of people coming to reclaim lost dogs that get handed into its shelters.

Dog behavior is the main driver of surrenders

The majority of dogs being handed over have significant behavioral issues.

Victoria’s COVID-19 lockdowns are believed to have largely contributed to dogs having these issues.

“People weren’t getting their dogs out enough in lockdown,” she said.

Lockdown, as well as people’s general aversion to socialising too much due to COVID-19, meant many dogs were not exposed to enough of the world outside their homes last year, causing them to become anxious.

With plenty of people buying puppies during lockdown, many dogs were not socialised between eight- and 16-weeks-old – the crucial time for their social development.

Ms Peiris said there were many dogs in RSPCA shelters that were not comfortable around other dogs, nor around people.

Dogs’ anxiety often leads them to having trouble interacting with others. 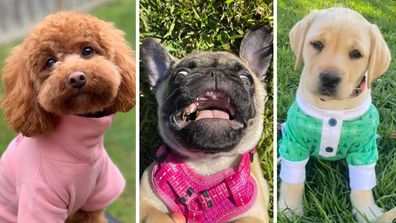 She said dogs’ protective instinct was “fight or flight”.

“And when they are on a lead you take that option away for them to run away,” she said.

People spending less time at home since COVID-19 restrictions eased is also thought to be affecting dogs’ behavior, likely leading to separation anxiety and the animals becoming destructive when at home alone.

However, while COVID-19 has led to a rise in dogs with behavioral issues, Ms Finch has seen the issue of dogs suffering from a lack of socialisation rising year upon year.

“Behavior issues are getting worse every year due to the lack of socialism,” she said.

And while Victoria was the worst hit by lockdowns, Ms Peiris also suspects the issue of an unusual number of dogs being surrendered is occurring around Australia.

“I would expect that quite a few of your biggest states are seeing capacity issues for sure,” she said.

Behavioral issues are one of the hardest problems for rescue centers to manage because they require a lot of attention to help get the dog in a state to be adopted out.

RSPCA Victoria is “absolutely desperate” for foster carers and volunteers amid the surrender crisis.

“I can’t even stress enough how desperate we are for volunteers,” Ms Peiris said.

“They do some super amazing and important work for the animals in the shelter.”

Ms Peiris said volunteers just coming into the shelter and interacting with dogs, giving them treats and cuddles, would greatly help socialise them.

People can register to become a foster carer or volunteer on the RSPCA website.

If someone could not care for their dog, rescuers would always prefer the animal to be surrendered.

However, the organizations are working to educate pet owners to help them manage their dogs and not to have to give them up.

“If there’s some way that we can help people to keep their animal, that’s what we’re aiming to do,” Ms Peiris said.

“If people are having problems returning back to the workplace, we can help them with what they can do to give their dog some enrichment during the day.”

The RSPCA customer team will also offer advice on behavioral training and are happy to be contacted for advice.

Of course, training dogs before issues arise is the most crucial step.

Ms Finch said German Shepherd Rescue Australia was putting emphasis on the need to socialise dogs, as well as just train them.

She said dogs should be given regular interaction with people, visits to public parks, and walks on lead.