PETALING JAYA, June 9 – When her partner’s beloved Border Collie of eight years died unexpectedly in 2020, Kelly Yan was not prepared for the rude awakening that came with seeing first-hand how deceased pets were usually handled in Malaysia.

The death of Pie, which happened a day after he fell ill, came as a shock since dogs usually live past 10 years of age. Kelly Yan is pictured in an interview with Malay Mail. – Picture by Miera Zulyana

“The death was very sudden, and we were unprepared, not knowing what to do next. We looked around and finally found a pet cremation service, ”she said.

“What they did next was grab hold of Pie’s four limbs and toss him into the furnace. That was it. It was truly unacceptable for us, ”she said as she recounted the harrowing experience to Malay Mail in an interview here.

Vowing not to let another owner live through a similar experience, Yan started researching the pet bereavement industry in Malaysia, determined to ensure a pet is treated with dignity and respect on its final journey.

Fast-forward several months later to early 2021, and Piepie Pet Memorial was founded with Yan at the helm as its sole pet funeral director.

Modeling her business on the established pet funeral industry in Taiwan and China, Yan said she enrolled in a course on pet funeral directing from Taiwan.

“After Pie’s cremation, we asked ourselves: Why is it that when they pass on, they are treated this way?

“In the beginning, it was definitely a struggle and a challenge for me. In fact, I started out from the boot of my car, traveling almost everywhere on a daily basis, responding to calls from pet owners without anyone to assist me. “It was only early this year that we moved into our new office here,” she gestured to the sparsely furnished but tidy space behind her.

While pet funerals were not common in Malaysia previously, the demand has grown, with owners wanting to give their beloved pet, with whom they have developed a close bond, a proper and personalised farewell.

Located on the first floor of a shop lot along Jalan SS 22/23 in Damansara Jaya, a memorial collage of various pets adorns the wall in the general area, followed by two small ceremonial areas separated by privacy curtains located at the back.

It is here that the owners are given the fullest opportunity to commemorate and say goodbye to their pet.

Goodbye is the hardest word

Understanding the grief and emotions that come with saying goodbye to a beloved pet, Yan said it was crucial for owners to be given the necessary support and consolation to overcome their sorrow. 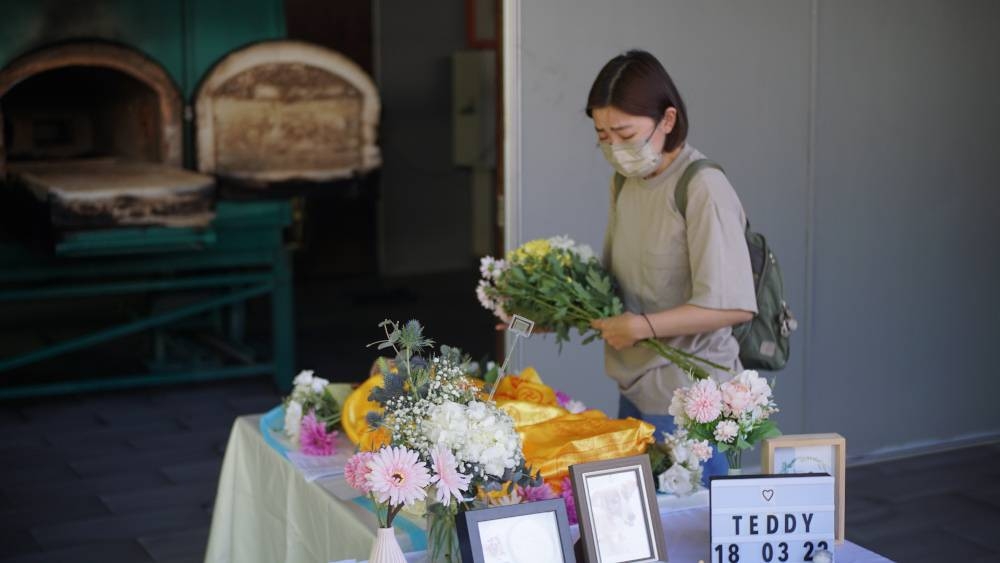 A pet owner performing the final rites before her beloved pet is cremated. – Picture courtesy of Piepie Memorial

As part of its farewell ceremony, a deceased pet will be bathed and placed on a bed in the ceremonial area where owners are then asked to participate in a solemn ritual of wiping and combing their fur.

Next, a grief counselor takes owners through a four-step ritual where they are asked to express their attachment to their pet in different ways, namely Dao Xie (Appreciate), Dao Qian (Apologise), Dao Ai (Love) and Dao Bie (Farewell).

“This part of the ceremony allows owners to appreciate the years of service and happiness their pet has brought them, seek forgiveness for any wrongdoings or negligence, tell their pet how much they are loved, and lastly, say their final goodbyes before the cremation process , ”Yan explained.

Yan said complimentary pet loss grief support arranged by one of the in-house counselors is offered to owners pre- and post-cremation.

Lim Shuang Ao, a fellow counselor, said it was a constant challenge for owners to confront their grief as there may be unfinished business or conflicts yet resolved following their pet’s death.

This could then manifest in the form of guilt that may prolong as owners begin coping with the sense of loss, Lim, who holds a master’s degree in counseling from International Medical University Malaysia, explained.

“The ceremony we provide allows owners to fully embrace the unconditional love they have for their pet because it can get very chaotic when death happens suddenly.

“In a way, we now have a structure and platform for them to express their overwhelming emotions as many will be in denial before they start acknowledging their loss,” he said. Solemn ceremonies where both owners and pet get together for the last time are conducted to mark the passing of a beloved pet at Piepie Memorial. – Picture by Miera Zulyana

Drawing comparisons with how a departed person is treated, Lim, who also works as a pet undertaker, said it was no different for a pet that was once living, and therefore, sees no reason why pets should not be accorded the same care.

“When we have this ceremony, this will let the owners know that their pet has the same importance as a living person who has passed on.

“We bear witness to their loss and validate their grief, telling them it is okay to be sad. Grief is not just sorrow; do not view grief as an emotion but a process instead, ”he added.

Furthermore, as counselors, Lim said they are also tasked with providing much-needed emotional support to owners who may suffer from disenfranchised grief.

According to Lim, disenfranchised grief is when one’s grieving doesn’t fit in with the larger society’s attitude about dealing with death and loss.

He said one such example is scenarios where people might expect you to move on and get a new pet since they are easily replaced, invalidating their grief directly.

“Many people think of grief as a period of intense sadness after a loved one dies, but it can look different for everyone. The lack of social support and sympathy you get during your grieving process can prolong emotional pain, ”he said.

Citing another example, Lim noted how children and adults view death and loss, concepts that can be both unfamiliar to the former and painful to the latter.

For a child, their reaction may be different from that of their parents since they have little understanding of the concept as compared to their parents who may have already experienced losses before, Lim explained.

As an establishment that accommodates requests for personalized memorial services, owners are given the liberty to choose how they send off their pet – from caskets and witnessing the cremation process, to floral arrangements and scripture readings.

Prior to cremation, owners are also given the opportunity to clip their pet’s fur and make a paw-print stamp.

At the end of the cremation process, owners are given urns containing their pet’s ashes or may opt for one of several mementos – a pendant, bracelet, keychain or ash pearls – for storing ashes or interring them in a columbarium.

However, Yan acknowledged they do get the occasional requests for burial, which she redirects to another bereavement service since Piepie is strictly for cremations. Various mementos and urns are available for purchase to store the ashes of a beloved pet as a keepsake. – Picture by Miera Zulyana

What is grief if not love persevering

With animal mortuary services becoming a permanent part of the nation’s professional landscape, Yan said one must possess intense enthusiasm in her line of work since strong and heavy emotions are ever-present.

She then briefly recalled how she and her staff had to shift through heaps of garbage in the middle of the night to look for a pet carcass which was mistakenly discarded as trash in a plastic bag.

Long story short, the near-decomposed carcass was eventually found and cremated with full funerary rites befitting a beloved pet whose unconditional love could never be replaced.

“Having done this for some time, I realize that every story is very heart-warming. This is especially true when I see owners expressing their emotions and love to their pets, their gratitude for our service, it’s all very touching, ”Yan said.

Admitting the existing misconceptions surrounding her line of work, Yan said she is constantly striving to change how society views the demise of pets and how they should be treated after death.

“A pet’s death is not just mere cremation or the chanting of prayers. There is more we can do for them.

“I do not want to let other owners experience what I experienced. What we are doing here is both an educational and awareness process, ”she said.

As this writer toured the office after the interview, an empty urn which once contained Pie’s ashes stood solemnly alongside an accompanying smiling portrait at the office’s temporary urn storage area.

What remained of Pie’s ashes had already been scattered in the sea long ago and only a small part remains in an ash pearl necklace on display in the reception area.

What came to this writer’s mind was not to think of what we have lost when a beloved pet passes away, but of what we have learned from them: The joy to be gained through feeling love for and taking responsibility for another living thing.