THE quality of teachers is determined by the passion and the training they receive.

While self-motivation and dedication are intrinsic, training and upskilling in the subjects they are expected to teach and in the latest teaching and learning pedagogy are the responsibility of the Ministry of Education.

The continued success of the Dual Language Program (DLP) classes where students learn Science and Mathematics in English is in jeopardy, stakeholders say as there are not enough good teachers who are able to teach the subjects in English (see factbox for DLP criteria) .

The demand for DLP classes currently outweighs the supply for the program and parents are calling for action.

The Ministry of Education, said its Minister Datuk Dr Radzi Jidin, is engaged in ongoing discussions to solve an issue involving DLP students who are finding it difficult to secure spots in classes at secondary school.

“Hopefully, once discussions have been completed, we (the ministry) will inform the best solution for this issue,” he told Reporters on April 28.

Dr Ramesh Nair, president of the Malaysian English Language Teaching Association (Melta), said the growth of the DLP now depends largely on the number of trained teachers we have.

These teachers must be comfortable in delivering content in both languages, and this is determined by the quality of training they received. Despite the great deal of investment in training in-service and pre-service teachers during the Teaching and Learning of Science and Mathematics in English policy (PPSMI) from 2003 to 2012, many schools today are unable to offer the DLP because the subject teachers are still not proficient enough to teach in English.Teachers in the system are a mix of those who had learned the subjects in Bahasa Malaysia (BM) since their primary school days, and those who studied Science and Mathematics in English in their secondary years. 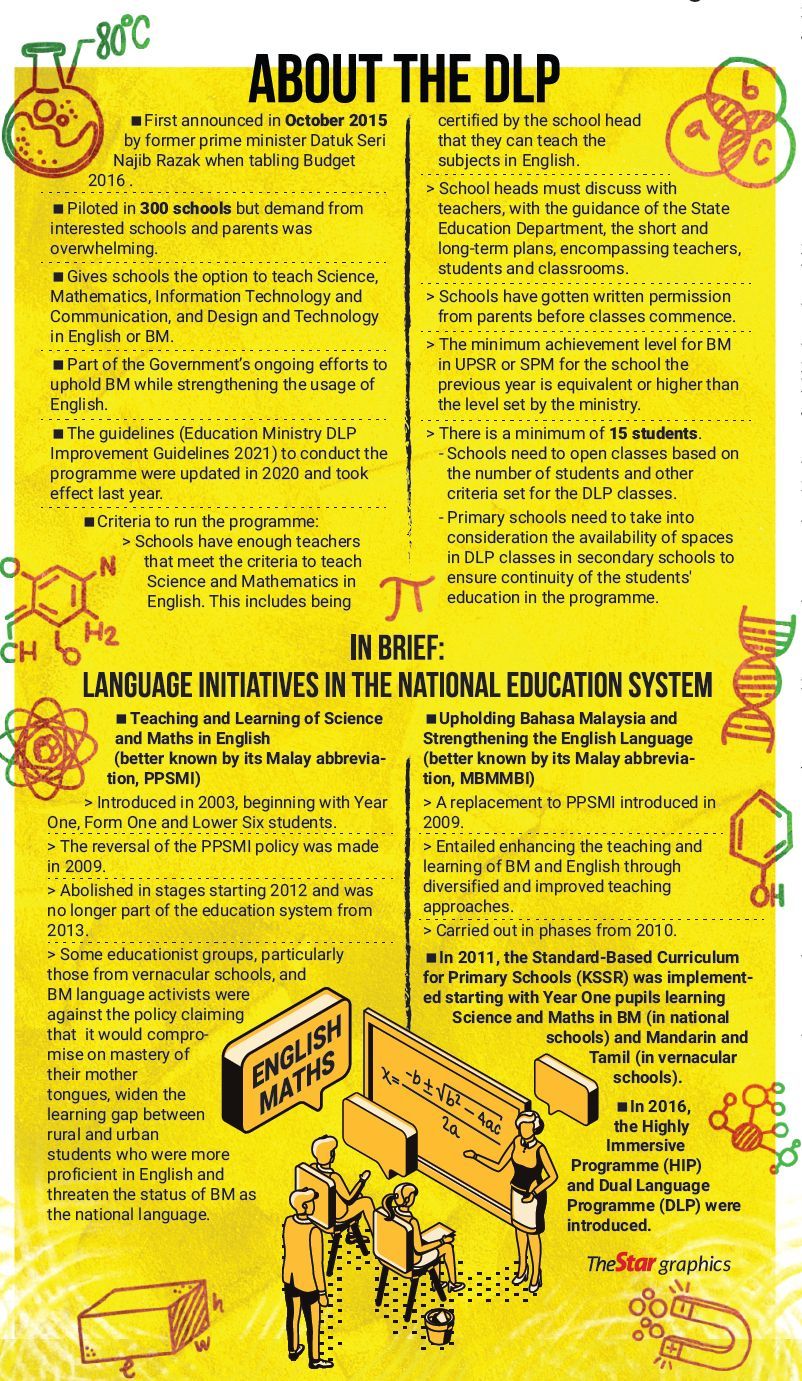 “If we are still short of teachers who possess the competence to teach the subjects in English, then we must ask ourselves where we have failed,” said Ramesh.

Even if the teachers were not trained to teach the subjects in English, they would still have had to undergo continuing professional development (CPD) activities throughout their careers, and have been made to show evidence of this as part of their annual performance Appraisal, he noted .

“With such mechanisms in place, all teachers should be equipping themselves with the skills necessary to ensure that they are capable of implementing national education policies.

“It would thus be fair to assume that every Science and Mathematics teacher in the last decade had received some sort of CPD to teach in both languages.

“So if schools are now saying that their Science and Mathematics teachers are incapable of teaching their subjects in English, there is a need to study why the CPD programs have failed these teachers,” said Ramesh.

Besides Addressing the needs of teachers who are already in our schools, there is a need to look at the training of Science and Mathematics teachers at our teacher training institutions and Universities, he added.

Noting that there is no quick fix to this problem, he pointed to the hasty implementation of PPSMI as a reason for its failure.

We cannot assume that teachers can be quickly trained to teach the same BM content in English because proficiency is acquired through the actual use of the language in a variety of settings, they said.

For both teacher and student to gain better Mastery of English, the usage of the language has to extend beyond English Classroom hours, he noted.

Besides PPSMI and DLP, the Ministry of Education tried to increase the use of English for activities outside the Classroom by implementing the Highly Immersive Program (HIP) (see factbox for info on programs).

But for any of these initiatives to succeed, the school leadership must present as many opportunities as possible for the languages ​​to be used, Ramesh said.

It is not enough to tell Science and Mathematics teachers to be proficient in English, they said, adding that if the goal is to improve English proficiency, instead of conducting the entire subject in English, teachers can continue teaching it in BM.

Those teaching a subject in BM could also assign their students project-based learning activities which encourage them to read additional materials in English, they said, adding that students should be given the option to present their projects in English.

“Allow both languages ​​to co-exist rather than pitting one against the other.

“Our goal is to help students master content while developing their critical thinking skills, and for this, our students should be leveraging their ability to use both languages,” they said.

There is also interest among teachers to teach the subjects in English, he added.

Acknowledging that there are not enough DLP classes in secondary schools to meet demand, they said it is a Manpower issue as there are currently not enough teachers.

“PAGE has always been critical of the BM requirement which is solely to appease national linguist groups,” she said, adding that this requirement penalizes half of the schools that are interested in running the program.

She said if the ministry intends to scale up the program, it should either remove or at least relax this requirement.

With more learning aids available in English, DLP remains a Catalyst for science, technology and innovation, she Stressed.

If teachers are still not able to teach the subjects in English, the government should implement a form of blended teaching where both languages ​​are used, she Suggested.

A number of residential schools, Noor Azimah pointed out, have agreed to using DLP. This, she added, greatly benefits the schools’ B40 students.

“The number of DLP schools in Sarawak exceeded the 1,095 DLP schools in Sabah and the Peninsula in 2020 yet the state was able to implement the program in all its 1,164 schools despite the challenges.”

Both my children are in a primary school in Bukit Damansara, Kuala Lumpur, and they are doing well in the DLP. We have not considered what to do yet if they do not get into a DLP class in secondary school. We would rather focus on the bigger picture, as in what kind of education we want for our children. Academics are only a small part of their future. There are other skills that are Vital for them to learn, for instance, financial education, character building, and emotional Intelligence.

We plan to educate our child Overseas so fluency in English for Science and Mathematics is crucial. Proficiency is also an important factor in employability, especially in this era. I am worried whether my 12-year-old son will get into a DLP class next year. It is important that he continues his education in DLP to ensure his performance in these two subjects does not deteriorate. A Sudden transition from English to BM will be stressful for the child. The language and terminology used will vary from what he is used to. Extra hours and coaching to catch up on the subject in BM will be required. All efforts and time spent learning the subjects in English will be Wasted if my child is unable to secure a spot in a DLP class.