GEORGE TOWN: Durian Fever is set to hit the Nation with the king of fruits already in season in Malaysia.

The country’s durian season unfolds in stages each year according to state, typically starting with Penang in May.

Johor follows in June or July before it extends to Perak and Pahang in early July or in early August.

Kelantan, Terengganu and Sabah follow by the end of July or in August, and the season ends in Sarawak at the end of August or in September.

Penang which kicks off the annual season produced RM280.77mil worth of durians in 2020, according to the Department of Agriculture’s Fruit Crops Statistics report.

Mention durians, and the first thing that comes to mind for many fans might be top producing states such as Johor and Pahang.

However, Penang’s durians have managed to hold its own among the connoisseurs of the thorny fruit, especially those grown in the Balik Pulau district in the Barat Daya district on the Southwest of Penang island.

Barat Daya is the sixth top durian producing district in the country.

“Many people feel that durians from Balik Pulau are among the best in the country.

“In Balik Pulau, we are blessed with natural factors as we are on the back of an island facing the sea,” said Bao Sheng Durian Farm owner Chang Teik Seng. They got the sea breeze, Mineral rich soil and the location of the trees – which in Balik Pulau is mainly grown on the hillsides – all play a role in affecting the yield and influencing the quality of the fruit.

“The farmers here are usually the third to fourth generation and our trees are old, around 40-50 years old,” said Chang, 62.

“Some of the trees are even more than 80 years old as they have been passed down from generation to generation and this explains the best flavor and texture.

“Everything adds up and with our dedicated farmers in Penang, the aging trees are being well maintained,” he adds.

According to fellow Penang Durian Orchard owner Ken Tan Chee Keat, the state has over 200 varieties of durian. 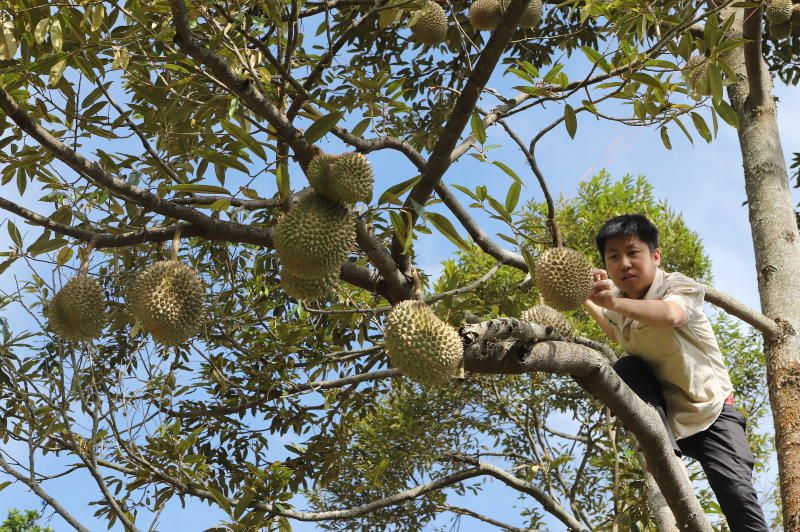 They said the more popular ones are Black thorn and Musang King are they are well known to locals as well as to international tourists from China, Hong Kong, United States and Australia.

“When people talk about Balik Pulau, they will always link it with the famous durians here,” said Tan.

“The durian trees here are aged and therefore the quality is good.

“We have a lot of vintage brands such as 747, 15, Green Skin, Kacang Hijau as well as Nasi Kunyit which cannot be found anywhere else and have a history of over 100 years,” he explained.

In terms of prices, both Chang and Tan said that heavy rains and strong Winds in March had caused the price of durians to increase.

Tan said prices are expected to be higher this year due to the uncertain weather and climate.

“We experienced heavy rain at the end of March through April and this led to durian flowers dropping before they became fruits.

“As of now, the prices of durians have increased by around 40% – 50% compared to last year.

“We had more yield last year due to the hot weather.

“However, this only applies to the first batch of fruits.

“The second batch from July to August should be a little cheaper,” he said.

Tan said that the Musang King, which used to average around RM40 per kg, will now cost about RM65.

“Black Thorn will be the most expensive at RM88 per kg currently.

Tan added that he has been receiving inquiries about his durians since early this month.

“Many customers have heard that it is Harvest season for durians in Balik Pulau now and have called to ask for durians.

“We have received about 20% more inquiries as compared to last year.

“Although we will be focusing on customers in the northern states of Malaysia, we will also deliver our durians to other parts of the country.

“We will deliver frozen durians to international customers including the United States, Australia and China,” they said.

Chang said the price of durians are usually influenced by the Harvest amount.

“This year, the rainy weather in February and March has caused many durian flowers to drop before they become fruit.

“There is a reduction of nearly 60% in fruits caused by the rain as compared to the previous year.

“The price of durian is very dependent on demand and supply.

“However, if the price is too high, some customers will buy less and some will even say no to durian.

“Durian is not a necessity, but there are customers who just can’t resist the Temptation of Durian,” he said.

Chang added that the price of some durians are according to durian quality and taste, more than its variety.

“I choose to highlight‘ old trees ’and the flavor of durians.

“The number of customers who like old tree durians is increasing every year,” they said.

Chang, who runs a Homestay at his Orchard, said the demand for durians is high this year as many people are traveling to Penang.

“This year we have upgraded our Homestay package and only take in less than 20 guests per day, so customers have higher chances of getting premium durians.

“Our in-house customers will get to spend more time with us.

“The private environment will also provide a better experience of durian tasting.

“We usually start accepting bookings for‘ stay + eat ’from March 1 every year.

“At the end of this month, we will start taking orders for deliveries to Penang, Kuala Lumpur, Ipoh, and other places,” he said.