ST. GEORGE – Three homes were damaged, and one destroyed when a fast moving fire in Scenic Arizona was carried by 50 mph winds, leaving residents, including several pets, displaced, while one pet perished before crews could reach the animal.

The incident was reported shortly after 1 pm MDT, when firefighters and emergency personnel were dispatched to a fire structure reported on South Kaibab Lane in Scenic involving a residence that caught fire and burned through the home very quickly, Beaver Dam Littlefield Fire Chief Jeff Hunt said. .

The first engine arrived and began suppression efforts, but the winds had picked up at the same time the fire started. The flames were picked up by the strong winds and then spread quickly to other structures on the property, including a travel-trailer and an outbuilding.

“By the time we got on scene there were 50 mph winds blowing out there,” said Hunt, adding those conditions coupled with an active fire are often catastrophic.

As fire crews were fighting the blaze on three fronts, the flames, pushed by strong winds, continued to spread until it reached a second home located nearby that caught fire, and then to a third, Hunt said.

After nearly two hours, fire crews were able to extinguish the fire that had burned through three properties, and shortly thereafter the blaze was 100% contained.

Beaver Dam Littlefield Captain Debbie Gates told St. George News that between the properties, there were four occupants who were treated at the scene for smoke inhalation. She also said that eight dogs were rescued and found uninjured, while one cat was unable to get out and is believed so have perished in the blaze.

Hunt said the home where the fire was initially reported was a brand new structure that was completely destroyed in the blaze, as was the travel trailer, while the shed located on the same property sustained extensive interior damage, but was not a total loss.

The home located on the property that was struck next sustained extensive damage as well, he said, but the structure was not completely destroyed. The third home sustained moderate damage in the blaze.

The cause of the fire has yet to be determined, Hunt said, and with the amount of loss associated with the brand new home that is now destroyed, he added, it is likely the homeowner’s insurance company will conduct an independent investigation into the cause. 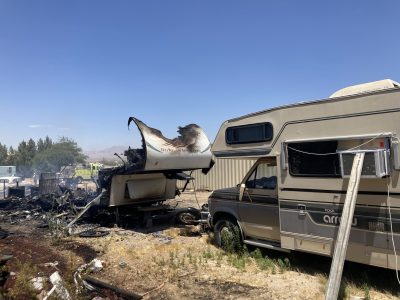 Hunt went on to say the incident on Friday was “the perfect storm” when the fire started and burned through the home very quickly, as weather conditions led to fast-moving winds that carried the flames to the other properties so fast, he said, “It all happened very quickly.”

Beaver Dam Fire and Rescue responded with multiple engines and one water tender truck, since the department’s second tender and crew are in New Mexico providing mutual aid, including Hunt. He recently returned to Arizona after spending 39 days there, as multiple fires continue to burn, including one that has burned through more than 300,000 acres.

Mesquite and Bunkerville responded to the fire Friday in Scenic with two engines.

This report is based on statements from police, emergency personnel or other responders and may not contain the full scope of findings. 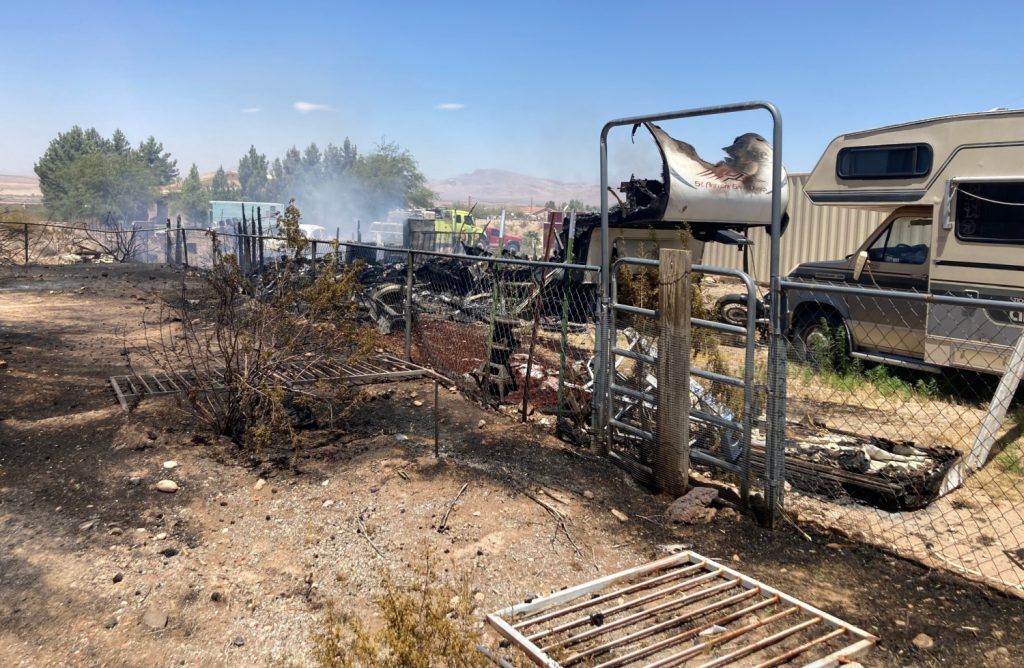 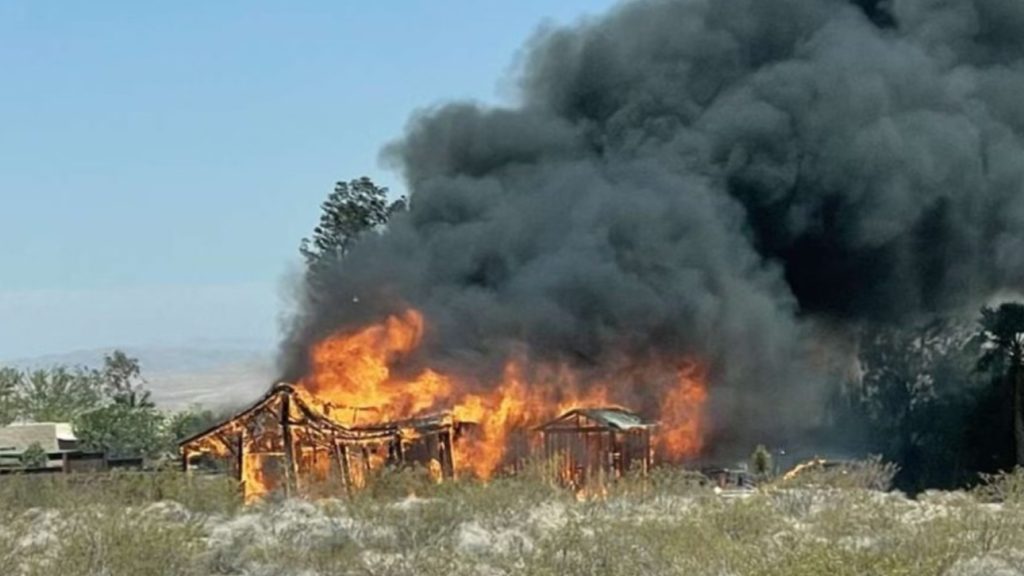 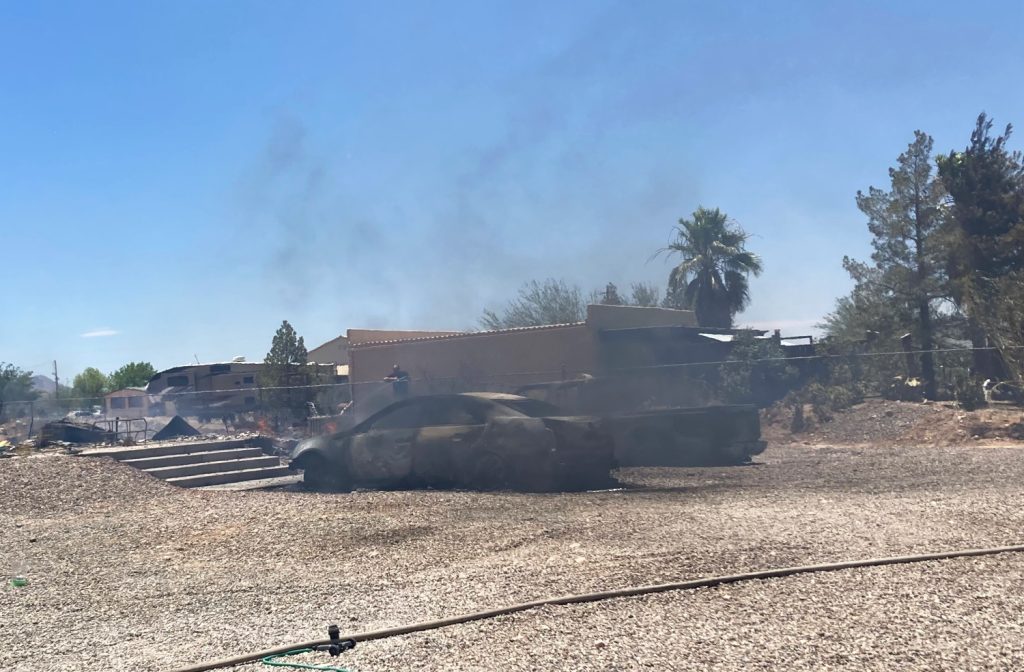 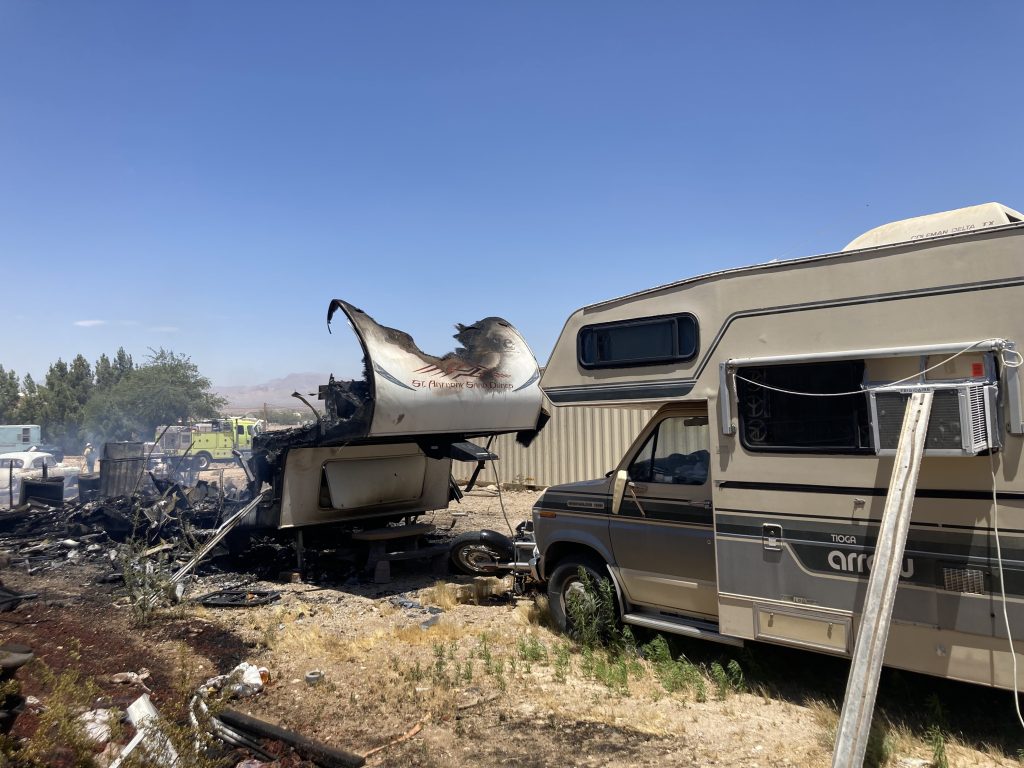 Cody Blowers was raised in South San Francisco, California. A 2013 graduate of Colorado Technical University, Cody earned her bachelor’s degree in criminal justice with a minor in paralegal studies. Through the course of her academic studies she discovered that writing is her true passion, and she is committed to providing credible, integrated news coverage. Cody joined St. George News in 2015, and when she’s not busy chasing the news, she can generally be found chasing her young granddaughter, Kali.