Cycling is a great way to explore the country, especially in Malaysia where back roads lead to quaint Villages and Charming towns. It’s truly an off-the-beaten-path way to travel.

If you’re looking to explore the nooks and crannies of a place that lead to mesmerizing murals or interesting small warungs, touring on a bicycle will bring you to many uncharted destinations.

And as Malaysia is famed for her warm hospitality, one is likely to be greeted by many friendly faces while pedaling across the country.

“Most cycle tourists rank‘ easy interactions with locals ’as one of their top reasons for traveling by bicycle,” said Eric Schambion and Amaya Williams.

The pair, on their blog WorldBiking, detailed a chance Encounter with a local who provided them with a shelter during a stormy night while on a cycling holiday in a village in Sarawak.

“It really is the people that make the places,” they wrote.

Malaysia’s appeal as a cycling holiday destination is often highlighted by tourism agencies and tour operators.

In an extended scene, three women cyclists are seen traversing the scenic highway. Another clip features a couple of tourists Discovering lush padi fields on their trusty bicycles.

For those looking for an Adventure in the Wilderness, Tourism Malaysia – in a statement on its website – recommends mountain biking instead.

“Mountain biking has long been a popular sport in Malaysia, with its own legendary trails and stories. It is said that ever since bicycles were introduced into the land, the Inland villagers who embraced it were the first mountain Bikers – having to Traverse the challenging trails to and from their remote Settlements, ”reads the description on the website.The agency goes on to detail that the country has both road and off-road biking routes that are also cycle friendly. It notes that traffic is normally not too heavy along rural roads, and that the views along the journey are absolutely wonderful.

“Around Kuala Lumpur, these routes are the old Gombak Road, Ulu Yam interior routes and to the south, the Ulu Langat interior via Cheras or Ampang.

“Beyond KL there are the Rolling hill roads around Seri Menanti and Kuala Pilah in Negri Sembilan as well as numerous East Coast routes with Sungai Lembing as an accessible site from Kuantan city.

Granted, not many people would want such a grueling activity while on holiday.

Fret not, though, as those who prefer a more leisurely cycling experience will have much to do and discover too.

Short-distance cycling in towns and cities, for one, eliminates the risks associated with riding along busy highways. In some urban places, you will even find a dedicated bike lanes.

Those interested in bicycle tourism are also spoiled for choice as there are many private tour companies that offer guided cycling tours.

These Tours usually cover accommodation, meals, a local guide and vehicles that have been specially modified for cycle Tours.

Bicycle tourists usually bring along their own gear, but rental is also available for a fee.

The aforementioned is certainly the more convenient way to go on a bicycle holiday. But if you’re up for it, planning your own cycling route and itinerary will give you more flexibility.

Some navigation platforms publish biking routes online that are uploaded or recommended by their members. The ones uploaded on the Komoot app feature details such as elevation profiles, surface analyzes and tips shared by other cyclists.

Another way you can do a bicycle tour in Malaysia is through themes such as heritage, nature and food. To help you get started on your bicycle holiday in Malaysia, we checked out some routes that you can explore on your trusty wheels.

Exploring George Town in the evening takes on a magical turn as the UNESCO World Heritage city comes alive with twinkling lights on many of its age-old buildings. Just as the sun begins to set, start off your ride at the Esplanade where you will be able to catch a beautiful view of the sunset. Cycling past old Colonial buildings in Penang in the evening is a Magical experience. – Filepic

The newly upgraded Esplanade was opened after a six-year construction to reinforce its Seawall. Also known as Padang Kota Lama, the venue now has walkways that are wider and terraced near the Cenotaph Memorial to allow people to get closer to the sea.

Then cycle along the coastal road of Weld Quay. Some landmarks to look out for are the Swettenham Pier and the Federated Malay States Railways Building (currently Wisma Kastam).

Turn into Little India and take in the whiff of spices at the restaurants along the Streets start preparing dinner. If you wish, stop to refuel with some snacks or drinks before continuing your ride.

After dinner, cycle back to the Esplanade area to look at the lighted up Penang City Hall and Municipal Town Hall.

From here, the Cheong Fatt Tze Mansion is just about 900m away. The famed mansion, when it’s all lit up, is absolutely beautiful.

Riding through Rapids in Kiulu, Sabah

Famed for white water rafting, Kiulu is a great place to explore on a mountain bike. It takes about 45 minutes to get to the Tamparuli district from Kota Kinabalu by car. Once you’re here, unload your bicycle and begin your Adventure in Pekan Kiulu. Try out the white water rafting activity when you’re in Kiulu. – Tourism Malaysia

There are several hanging bridges in Kiulu and riding through them is definitely an exhilarating – and challenging – experience.

This is because you’ll be riding above the Rapids of the Kiulu River – all the while trying to maintain your balance on a swaying bridge!

Riding in Kiulu will also unearth traditional farmlands and rice fields. The cycle is to Kampung Tombung which is home to Mostly Dusun communities. Tours offered by some private operators will stop at the Native Dusun House. Here’s where you will be served traditional delicacies such as linopot (native rice packed in Giant tarap leaf, with some side dishes like fried fish and preserves).

If anything, a bicycle tour in Kiulu will involve a lot of interaction with the local community. Riders will have the chance to join villagers on rubber tapping trips and observing local cultures.

The best part of is now Tours channel part of the tour’s proceeds for the betterment of the local community in Kampung Tombung.

Of course, be sure to try out the white water rafting activity too when you’re in Kiulu.

The smallest state in the country is big on adventures – and cyclists can get a taste of that in Arau. The royal town is relatively quiet, making it a perfect spot to explore on a bicycle on the main roads. 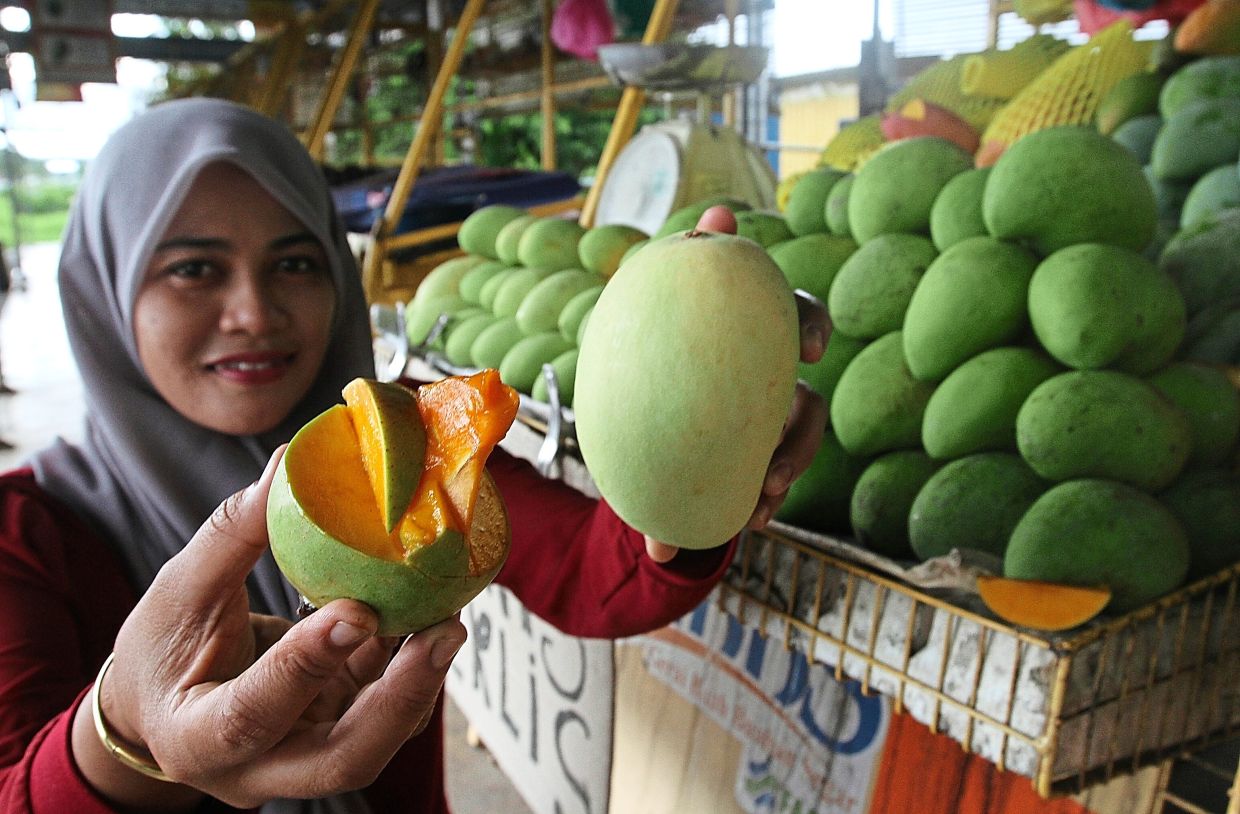 Need to refuel after all that cycling in Arau? Sample some Harumanis mangoes, which is a popular fruit in Perlis. – ZHAFARAN NASIB / The Star

Located in the south of Kangar, Arau is home to the second last railway stations before the Thai border. And the KTM station here is where you can start your excursion.

Given its status as a royal town, Arau has several regal attractions that are worth checking out. These include Istana Arau, Perlis Royal Gallery and Royal Mosque. The royal palace displays Majestic architecture while the gallery houses the royal collection of Malaysia’s smallest state.

Do note that visits to the gallery are on an appointment-only basis.

Need to refuel after all that cycling? Well, be sure to tuck in some Harumanis mangoes, which is a signature fruit in Perlis. Some warungs might even serve these mangoes with a side of nasi pulut.

In Kota Baru, trishaws are known as taxis. Locals will ride in them to go to the market or eateries. There are many places of interest to cover in Kota Baru. These include the War Museum, Merdeka Square and the State Mosque. The War Museum, also known as Bank Kerapu, has some outdoor exhibits such as armored vehicles. You should be able to get a glimpse of these items as you ride past.

Many of Kota Baru’s famous attractions are located within the city center, and close to one another. So you should be able to travel to many iconic spots on a short ride.

Be sure to stop by Pasar Siti Khadijah to sample some local delicacies.

Then ride on to Jalan Dato Pati where you will find a vibrant street art scene tucked in the back alley. Many of the buildings here have been revitalized with colorful murals.

Car-free and Carefree in Kuala Lumpur

Every first and third Sunday of the month, the KL Car-Free Morning (KLCFM) takes place in the capital city. The initiative (from 7am to 9am) starts from Dataran DBKL (near Dataran Merdeka) and extends about 7km of major streets in KL’s Golden Triangle. 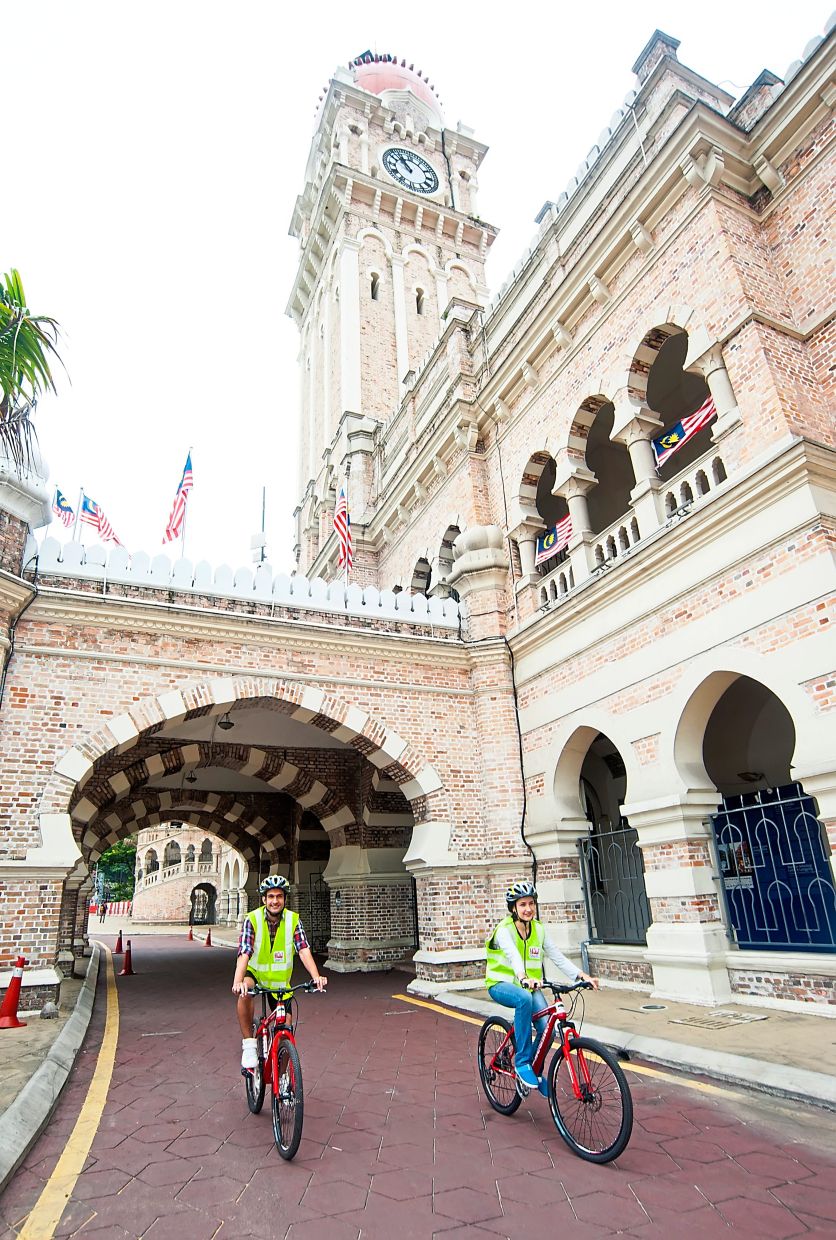 The KL Car-Free Morning takes place every first and third Sundays of the month. – Tourism MalaysiaKLCFM give cyclists a Safer environment to explore the usually bustling Metropolis. A good starting point is the KL City Gallery. From here, you can make your way to other historical landmarks in the city. These include the National Textile Museum (formerly known as the Federated Malay States Railway Station and later, the Selangor Works Department), Sultan Abdul Samad Building and Dataran Merdeka.

Cycle a little further out of the historical hub and you will be greeted by verdant greenery. Spots such as the Perdana Botanical Garden and Taman Tugu will provide some respite from the morning heat.